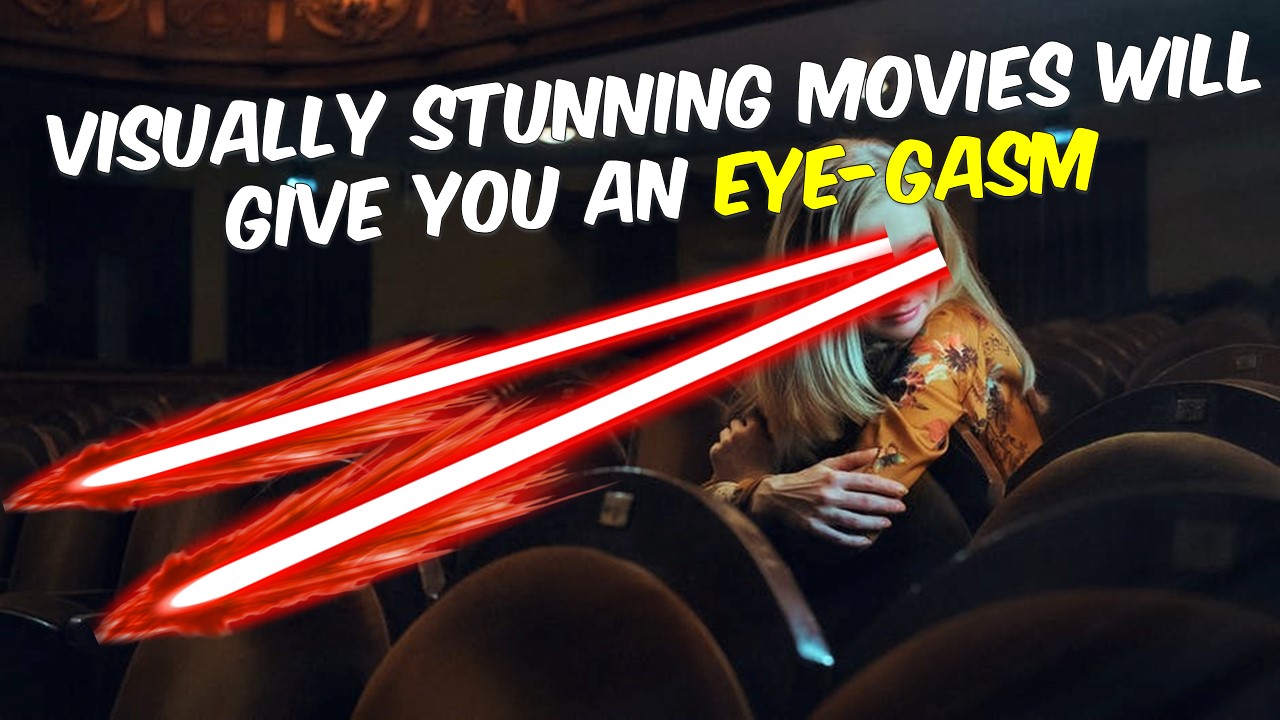 Do you ever get tired of watching the same settings in the same movie? Generic futuristic backdrop or some generic city in America again and again? A castle or a mansion or something similar? Movies that just look and feel the same?

Avoiding the obvious picks such as Anomalisa, here is a list of great movies that incorporate a great visual style into their storytelling.

Starting off strong on the list, we have 1990 detective thriller, Dick Tracy. This movie was based on the classic 1930’s comic strip (entirely obsolete nowadays especially to us Asians), featuring a host of oddball villains trying to monopolise crime in the city. Except for the affable police detective chasing them down, noir style.

Set in a colourful, fictional world, the detective is found caught between two gangsters as he struggles with his relationship. Stark colours set against duller backgrounds colourise this typical American gangster plot. It’s strikingly beautiful, and the characters are immediately unique and are what sets this aside from other movies of the same genre.

This animated documentary of the University of Texas tower shooting may sound boring at first, but you will be immediately drawn in by the visuals. The film makes use of classic-looking animation against real-life backdrops of the campus itself. This bizarre combination of 2D and 3D breathed life on what would have been a typical, cheesy re-enactment and dramatisation of a tragedy.

Mixed with actual interviews of survivors from the incident, the whole movie felt real, and the drama felt palpable. You could feel the joy and sorrow of every character on screen, and it is difficult to draw your eyes away.

It is definitely worth watching for the style alone. The excellent retelling of a tragic story only makes it better.

Leave it to the Russians to be able to cram a car chase, explosions, lengthy gunfights, plenty of violence, and some nudity into a one and a half hour movie. From the subtle introduction to the amped-up ending, this first-person movie will give you a thrill ride akin to a roller-coaster.

The entire film is done in thrilling first-person, with a Go-Pro mounted on the actor playing the titular character. The acting was a little off, but the action and the perspective more than made up made up for it. It gave a unique viewing experience quite unlike any other movie, especially since action movies have been shown to be endlessly repetitive and needlessly cut from angle to angle in mere seconds.

Long shots of gunfights, fisticuffs, intercut by brief scenes of exposition, the movie plays and feels like a video game (the ending even alludes to this). It consists of a very tropey, cookie-cutter hero vs villain storyline, but only so that our protagonist could have plenty of opportunities to kick ass in ridiculous situations and ways.

Give it a watch if you’re an action fan.

If you remember Tower from earlier in the list, this is that but with a different style and theme.

Released in 1988, this controversial cult film features familiar characters projected in the real world. The film creatively creates a world where both cartoon characters are real people co-exist in the same world, and the cartoon characters work for a real-life crew to make the cartoons we enjoy today. They obey different laws of physics, and of course, reside in a separate area segregated from real people.

As per classic crime films, the movie takes on a “whodunnit” format, as a PI investigating a high-profile case gets drawn into something that creates grave tension between both worlds.

It is interesting to watch the 2D characters react with real-world objects and people, and vice versa, as it gives off a bizarre, otherworldly vibe. Do put it on your list of films to watch before you die.

Despite this movie starring an ensemble cast including Tom Hanks and Halle Berry, this movie never took off because it was too grand too some. That’s because this 3-hour epic contains 6 different stories in 6 different timelines: 1850, 1931, 1975, 2012, 2044, and a dystopian future far off in the future. While each timeline does not feature an inherently unique setting, watching the movie flawlessly transition between each scene is a sight to behold.

If all that hasn’t excited you already, the plot carries across from each era, connected via a grand central theme. It’s watching 6 different movies of 6 different genres all playing at the same time, like a spectacular orchestra.

Do watch this movie. It may change your life.

This is a bit of a cheat to get one of my all-time favourite movies on the least. But you’ve got to give it some credit.

While this movie does not have fantastic CGI, fantastic fantasy setting, or incredibly bizarre characters, this movie does solely occur in a car for its hour and a half runtime. You will be further miffed when you know that the film involves the titular character talking to people you never see through the car’s built-in phone.

Making a good movie from that, now that is a truly spectacular feat.

Backed by a tense story riddled with twists and phenomenal acting from Tom Hardy, the movie plays out thrillingly. As long as you pay attention to the dialogue and the consequence of each exchange, you will never be bored. The story tells the tale of a construction worker struggling with tough personal decisions and juggling important conversations with people, as he takes on a surprising new personality.

If you are feeling sick of clichéd dialogue, chaotic and noisy visuals, and run-of-the-mill storylines, this movie is for you.

This bizarre French film set in Tokyo is the stark opposite of Locke. This movie utilises psychedelic colours and plays out like a dream. There is a plot, but it’s buried somewhere in the 3-hour runtime, but really, it’s the visuals that make this movie so intriguing.

The opening credits itself has earned a lot of praise for its aesthetics, so let that speak for the movie. And after that, the film never overstays its welcome, and it never relents with its bombardment of strange camera works.

What else is there to say? Settle down, and enjoy the visual treats.

This movie was sadly overshadowed by The Matrix which was released later in the same year, which unfortunately had a very similar plot. However, the noir style, the fantastic Gothamesque setting, and the plot are horribly underrated.

The movie features a man with a memory issue (anything more specific and the movie will be spoiled!) in an alien world very similar to ours, as he pursues his Utopia. In his journey, plot twists are introduced, and he soon finds himself being chased through the streets of the city as he desperately looks for answers.

The unsettling and unnatural atmosphere, grim setting and twisty story are definitely worth watching. Just be sure to watch the director’s cut.

1. Sky Captain & The World of Tomorrow 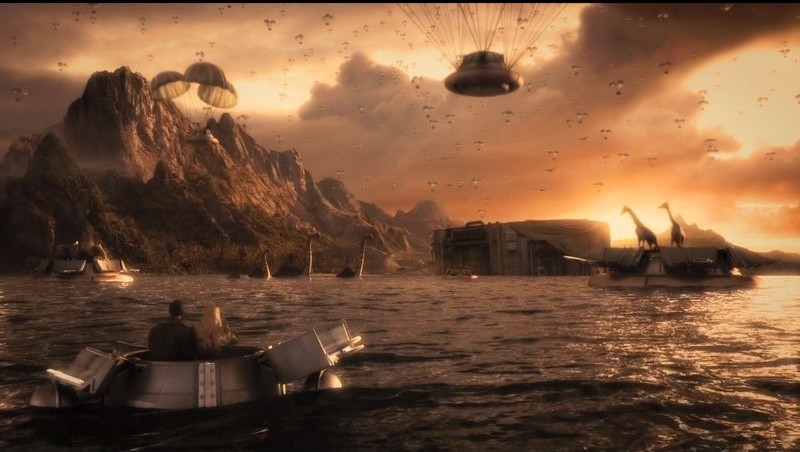 This movie will surprise you.

Released in 2004, its use of blue screen CGI effects are just amazing and revolutionary. Making use of old comic book styles, the movie features two characters in an impossible world invaded by robots and features a typical all-American hero pitted against a mad scientist armed with a world-ending threat. And yes, he gets the girl in the end.

The movie’s style and CGI age well and does not look cheesy or bad as many older films did; instead, it merely seems like a stylistic choice. The terribly ordinary plot also only adds to the charm of the atmosphere.

Give it a watch if you enjoy a nostalgic throwback to the old times.

This movie is Japanese. This alone should set off alarm bells.

I don’t consider this as an actual movie, but.. something else. The movie features just enough plot to bring the protagonist policewoman from one location to another, to engage in more bizarre fights with bizarre creatures and monsters.

The effects are purposefully exaggerated with spurting fountains of blood and physics-defying jumps, such that one cannot take the movie seriously. It would otherwise be a typical American slasher film, but instead, it’s a comedic exploration of Japanese creativity.

If you have some spare time, sit down and enjoy this strange moving picture that you will never forget.