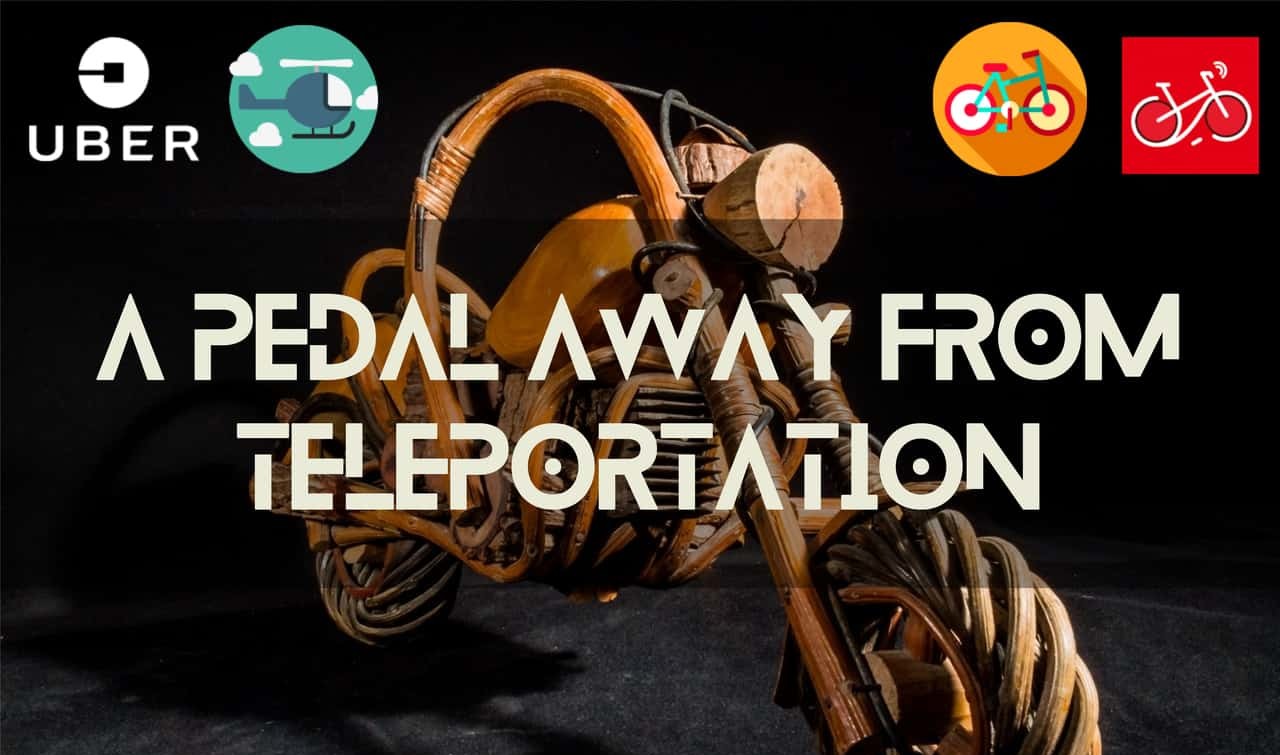 While many are now familiar with the concept of regular bicycle sharing, other types of transportations that have been up for a share in Singapore for quite some time have remained unheard of for quite some people.

So, what transportations you may ask? Is it a plane? A helicopter? Private jet? Motorboat? Alas, it’s none of those. Those services have yet to set its foot in Singapore. They are, however, available in countries like Dubai. Dubai has a service under Uber called UberCHOPPER, that enables users to book a ride via helicopters. Yes, it’s not precisely a sharing service, but Singapore should totally adopt this! Imagine how pleasant a trip to one’s office can be, seeing as to how you’re now able to whisk your way skyward and skip all that peak periods’ heavy traffic!

For this particular article, we’ll look at various forms of bicycles that are being shared amongst the masses (or in some cases, it can only be used for those within the docks vicinity) similarly to cruiser bicycles that’ll ring a tune of familiarity to many. You know, the usual O-Bike, Ofo and Mobike ones that have become common sightings at the Void Decks of almost every Housing Development Board (HDB) buildings in Singapore.

Upon seeing the success of bicycle sharing in Singapore and how it has already become part and parcel of Singapore’s typical scene, Mr Ethan Tan decided to launch a bicycle sharing service of his own. With a twist. His bicycle sharing service doesn’t provide ordinary bicycles. They’re not carved out to be one that can be used by either the young who wants to use it to go to school or the old who intends to fill up the basket with their wet market purchases. Instead, his bicycles are one catered for those who are adept at riding on rough terrains; mountain bikes.

Just like other bicycle sharing services, his services can also be used via app format. The app in question is called ShareBikeSG. It is available for download on both IOS and Android devices. The app is in crimson red with a bicycle that was drawn in white with several black outlines. There are also three white curved lines located near its handlebars possibly to showcase how this service can be accessed via Bluetooth. Oh and yes the app is free across all devices so one needn’t shed a single dime to download it.

Upon downloading the app, one may be possibly pleasantly surprised by how easy it is to gain access to all its features. Gone are the days when one has to key in their mobile devices number and wait for the code to come through. Those days whereby you’d have to tediously key in the received code into the provided boxes within the app only to be apprehended by another series of forms to fill up once more, like the payment forms or even the page that demands one to pay a deposit before being bestowed with the ability to view their services.

ShareBikeSG app skipped all those aforementioned painstaking steps. One will be able to see all their features including the map itself the moment you open your already downloaded app. The app is also user-friendly. Everything can be comprehended to a tee, and it’s a wonder if anyone can get lost in confusion while using that app. The only flaw that can be found for this app is the bikes itself. Where are they? They can’t be found anywhere on the map.

ShareBikeSGs bikes can only be found at Singapore’s Chestnut Nature Park. Why not other Parks in Singapore too? Especially at densely populated Parks like East Coast and Pasir Ris Parks, to name a few? Services at those areas may probably be made possible in a year or two or maybe not at all.

Nonetheless, having services that aren’t that easily accessible doesn’t make their bicycles awful. In fact, their bikes are of high quality. Their bicycles are red in colour. Their shade of red isn’t a far cry from that of their app. Their wheels are a solid black with white forks. Their bicycles are equipped with shock absorbers and springs. The smart locks can be found wrapped around the seat stay. One can change gears within arm’s reach with a twist on their rubber clad handles. A safety light that’s powered by solar energy has also been placed underneath each ShareBikeSG mountain bikes. That’s not all, a device that’ll help calculate the distance that you’ve covered on their bike is placed on their stem. Another form of lighting, but one that’ll make night cycling a breeze is placed underneath that aforementioned device.

So why mountain bikes, some might ask? People behind ShareBikeSG, apart from Mr Ethan Tan, were said to have an immense interest in mountain biking all along. Fueled by their interest and the desire to ignite some enthusiasm towards this sport to better the communities wellbeing and vigour, ShareBikeSG was formed.

Cruiser and mountain bikes aren’t the only ones being offered within this shared services industry. E-bikes; Electric bicycles are too! They were introduced at the start of this year but can only be found within the compounds of Nanyang Technological University (NTU). Staffs and students of that school as mentioned earlier are bestowed with the opportunity of testing out Singapore’s first e-bike sharing scheme for free for approximately a year long.

It is regrettable to inform you that not much information can be found regarding the app that was launched for this service. Some articles stated that NTU had released an app called NTU Freetomove whereas there were also articles that reported on how the app was called Free2Move. What remained mysterious was that neither Freetomove nor Free2Move could be found in the app stores. How mystifying.

Nonetheless, this e-bike sharing scheme was made possible thanks to the collaboration between NTU and a company called Free2Move. The latter is under Singapore’s Port of Singapore Authority (PSA) which has brand’s like Citroen and Peugeot under their belt.

These e-bikes are surprise surprise…, Peugeot! With 25km/h being its maximum speed. There is a total of 20 of them confined within the entire campus. They’re all painted white with a tinge of blue and pink on its chainring. Each e-bike can be found placed on one of the two docking stations that have been installed explicitly for them.

As mentioned previously, students and staffs can unlock these e-bikes from their docking stations for free. Those docking stations serves a dual purpose; parking location for the e-bikes as well as a place where those e-bikes can be automatically recharged.

These e-bikes sharing services will remain free for a year as it’s considered to be a “trial period”. It isn’t too far-fetched to assume that their sharing services will charge a hefty sum of money; one that’ll be much more pricey than ordinary bikes that’s up for share like the O-bike and Ofo ones but won’t render you completely penniless, if the outcome of this trial is deemed a success.

Home » Lifestyle » UberChopper, ShareBikeSG, Free2Move – A Pedal Away from Teleportation