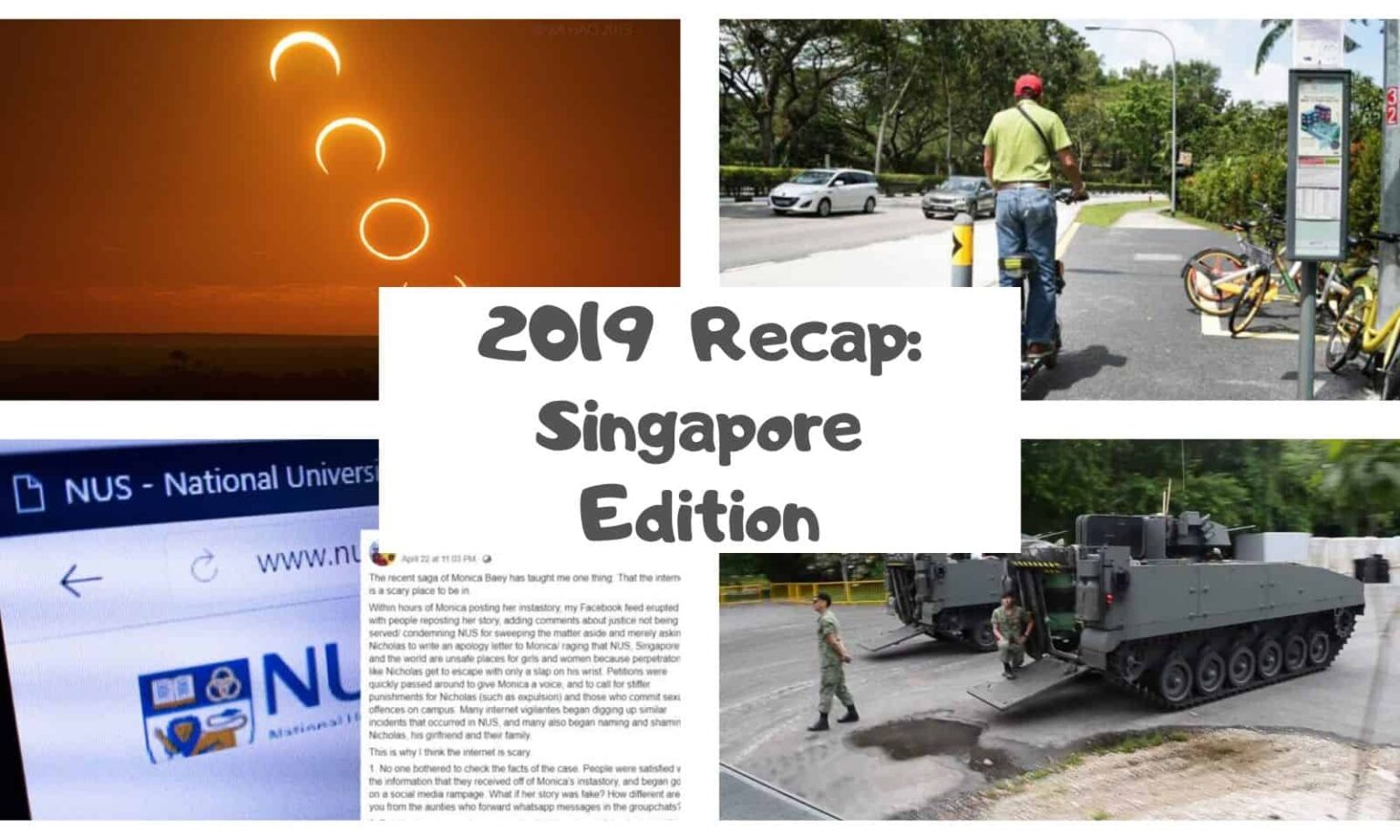 As the year comes to an end, here’s a 2019 recap of the more notable events that happened in each month that you should probably know!

First on the list of the 2019 Recap – On 20th Jan, Aloysius Pang was seriously injured during an exercise in New Zealand while carrying out repairing duties on the Singapore Self-Propelled Howitzer. He received treatment at Waikato Hospital. Unfortunately, they were not enough and Aloysius Pang subsequently succumbed to his injuries. Public discussion on how the Singapore Armed Forces handles army safety issues was ignited. Findings revealed that there were safety lapses by all 3 parties in the gun cabin.

February: Go Jek – Is it because I’m Chinese?

While it was first published on 31st Jan, it went viral and got the Singapore internet went crazy over it during February. A woman in the video accused the Go-Jek driver of kidnapping her by locking the door after she realised she had to pay for ERP. She subsequently came up with the interesting phrase “Is it because I’m Chinese?” after the driver communicated in Malay with a Cisco officer. The following remix summed up the incident very well.

March: Hi, my name is Imran

These marketing videos started popping up on Facebook somewhere around March, most famously Imran (Do not confuse him with our SAF Imran. In his video, he claimed you can start your own business and travel overseas every two months. You will receive free coaching sessions as long as you have an internet connection and laptop and you can start your session. Many have realised this was a possible scam and decided to make a meme out of it.

In 2019, Singapore sparked with a series of campus voyeurism cases and also many sexual harassment cases. This created the #metoo movement in Singapore. One of the most notable cases is the one concerning Monica Baey. Baey started her rant on her Instagram stories back in April about how the man who filmed her was only given a conditional warning and a one-semester suspension for filming her in the shower. She was outraged by how NUS handled the case. Her stories quickly garnered a lot of attention, not only by her fellow school mates but also the media. Not only did it prompt NUS to implement new security measures, but it also got the nation talking about it. Sadly, that was not the last case about on-campus voyeurism.

Maybe. It is an online platform for you to rent a date. You can find a company for a few hours as long as you are willing to pay the price. However, Maybe have safety measures implemented, it is more for a companion instead of a date-date. If you need someone to bring home for Chinese New Year, maybe this could be a good place to start?

The Money Authority of Singapore announced it will be awarding five digital banking license, two of which are fully digital bank license while three will be digital wholesale bank licenses. Companies have to be headquartered in Singapore and controlled by Singaporeans. Grab and Razer are expected to apply for this. This is a significant step for Singapore in its effort to liberalize banking.

On July 2, police were called into Orchard Towers after a man was found lying on the floor. Video of the murder started spreading on the Internet. Subsequently, 7 people were arrested for the murder of the 31 years old man.

End July and the start of August are the time when most universities orientations are held. We admit that we do make some offensive, suggestive and racy cheers during orientation, however, nothing as ridiculous and explicit as this one. You can have a recap of it below and let us know what cheer do you remember back from orientation too!

During the month of September, the haze returned to Singapore for the first time since 2016. It was not as serious as the previous time as PSI mostly peak at the unhealthy range. However, as kiasu Singaporeans, some rushed to buy masks in case it worsens. Better spend a few dollars for the sake of health!

The Protection from Online Falsehoods and Manipulation Act or more commonly known as POMFA or “the Fake news law” was kicked in on Oct 2. It is intended for the government to remove malicious falsehood online and also for individual and organisations to have the ability to seek recourse from the courts. Individuals are also able to appeal a minister’s decision via the government or the court under POMFA. In the following 2 months, POMFA was first used on Nov 25 after DPM Heng Swee Kiat issued a correction direction against Brad Boyer. Facebook also removed the NUSSU fake page which misquoted Shanmugam when States Time Review refuses to comply with POMFA. POMFA was also used on Lim Tean and also SDP.

PMD was officially banned on footpaths on the 5th of November. While many celebrated the increase in safety for pedestrian, many food delivery riders are unhappy that their rice bowl is affected because of a few black sheep. Many riders met with their MPs to raise their concern and the ministry offered a $7 million grant to assist riders in getting a power-assisted bicycle or a bicycle. Others became creative and started riding on the grass patch, drain covers and even the roof?!

December: The Ring of Fire

On 26th December, your social media is probably flooded with eclipse photo. It is the annual solar eclipse that hits Earth. Many people gathered to watch and take a photo of this rare occurrence. It is certainly a memorable way to celebrate boxing day and the end of the year!

Hope you enjoyed our 2019 recap! 2019 is a year filled with many unfortunate incidents. Hopefully, the next decade will be a better one for Singaporeans and the world.