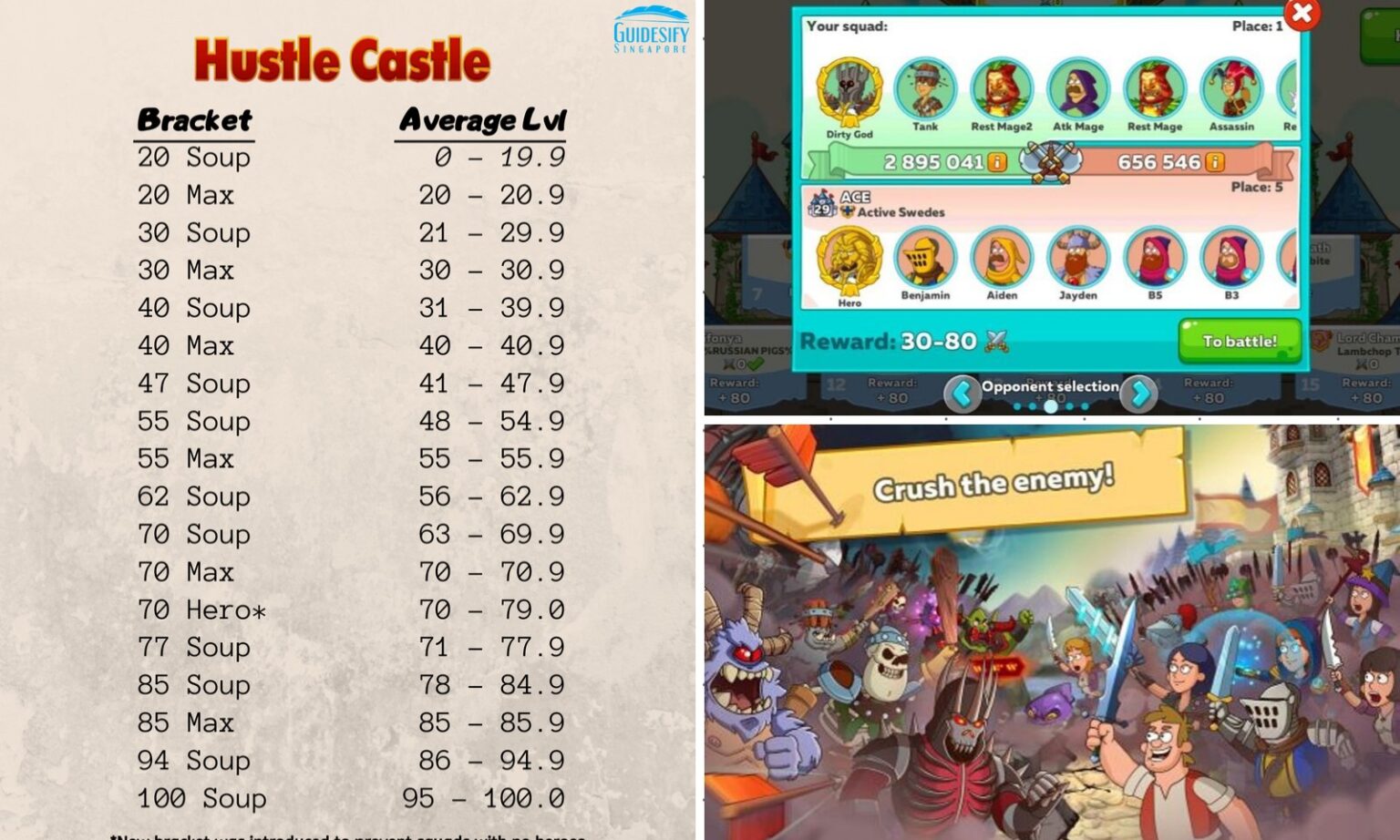 Arena, also known as the Tournament, only second to Gem Bay in terms of difficulty, is one of the most mind-boggling places in Hustle Castle. In this guide, we will be sharing more about the bracket system and strategies that you may find useful.

Disclaimer: This is not an official guide by Hustle Castle. The information listed here is not confirmed by any developers and are merely put up by a few enthusiasts that got tired of explaining repeatedly to newcomers. See any inaccuracies in this guide? Contact us and we will get it fixed right away!

1. The Foundations of The Arena: Skip If You Already Know!

The arena consists of 5 stages and lasts approximately 15 minutes. Players are arranged into a tier system according to the following criteria:

* Official Announcement/Criteria by Hustle Castle on the Arena:

The brackets system will be explained in greater detail in a separate section of this guide. Typically, official brackets pit 15 players against each other, while soup brackets may only pit 10 players.

There are 2 ways to enter a tournament, food and arena tournament tickets. If entering with a ticket, there is a minuscule chance of winning the Royal Tournament Chest when placed in the top 3 at the end of a tournament.

To earn tournament tickets, you can complete daily ad videos and invasion missions. Placing 1st with a food tournament will also earn you tickets.

Entering the arena with food or tickets do not change the amount of glory earned per battle won.

After grinding endlessly at the arena, you can spend badges of courage, the currency earned through Arena battles, at the arena shop. The arena shop sells various items ranging from specialised arena only gear, as well as artifacts.

At TR8 and higher, the Master Chest is guaranteed to come with 1 legendary artifact.

Badges of Courage are earned in the arena even if you lose every round. When fighting with a ticket, the number of guaranteed badges for attacking each round is 60 while using food will only give you 20 free badges. These guaranteed badges can stack on top of the badges you earn from where you are placed in the tournament.

Popular opinion on the chests, for the most part, are a waste of badges.

The only time to consider buying chest would be when you have recently upgraded to a new TR level. If so, level only 1 fighter to his or her max threshold and trigger max level gear drops from the chests.

If you are only looking for 1 or 2 legendaries to finish filling up your squad’s gear, a random chest will most likely be a waste since you have no control over the loot.

Instead, craft the items or look for specific gear listed at stores, be it the tournament or soul portal store.

However, if a chest is necessary, purchase only the Master Chest as it guarantees legendary gear for your badges. From TR 8 and up, you are also guaranteed 1 Legendary Artifact from the Master Chest.

3. Arena Special Gear: What Should You Expect?

Aside from event items, most players would know that gear obtained from the Arena store sure can pack a punch, literally!

There are a number of gear items that offer increased damage unless the target is stunned. We do not recommend these items as many things can stun a target. You need to be aware of the buffs your items come with.

Bows, Abyssal Summoning, Maces and Explosion Hazard are a few examples of the items that can stun a target, thus resetting the increased damage buff to zero.

4. How Prepared Should You Be Before Attempting the Arena?

Being the strongest sure as hell means that you will have a better chance of getting crowned the big dog of the arena.

But that doesn’t mean that you have to be (explained in the strategy section below).

To be adequately prepared to stand even the slightest chance of getting placed, artifacts are an absolute must.

A long time ago, you can get away with zero artifacts on your squad, even at the later Throne Room levels, but all that has changed.

With all of the event exclusive items, bots and cheaters saturating in the arena, start buying artifacts as early as you can. Farm badges even if you consistently lose.

Eventually, you will have enough saved to purchase them, and if legendary artifacts are available to buy, do not waste badges on epics.

Still a weak TR 6 player and struggling in the arena? You may consider purchasing Rare Jewellery first before the artifact. Jewellery can make a huge difference in how you do.

Here is our suggested Competitive Squad Power for Official Arena Brackets (Without Hero):

Do not rush into upgrading your buildings. Take your time.

Rushing may get you stronger with better tier items and maybe even a hero, but you will be constantly facing enemies completely out of your league. Without a doubt.

Don’t believe us? Here’s an example of 2 different arena brackets at the same average fighter level of 70:

*example 2 & 3 belong to the same arena bracket currently and developers have yet to fix it.

Still don’t believe us? Here’s a screenshot of us bullying a player who had rushed his or her levels in the arena.

To be more prepared, you first need resources. Here’s a Hustle Castle PvP guide on how you can easily milk your opponents for resources every day with a simple routine.

Within the arena are brackets and these determine the type of player you face.

For simplicity’s sake, there are 2 kinds of brackets, the official brackets and hidden soup brackets.

The below data illustrates the brackets you will most probably land in: 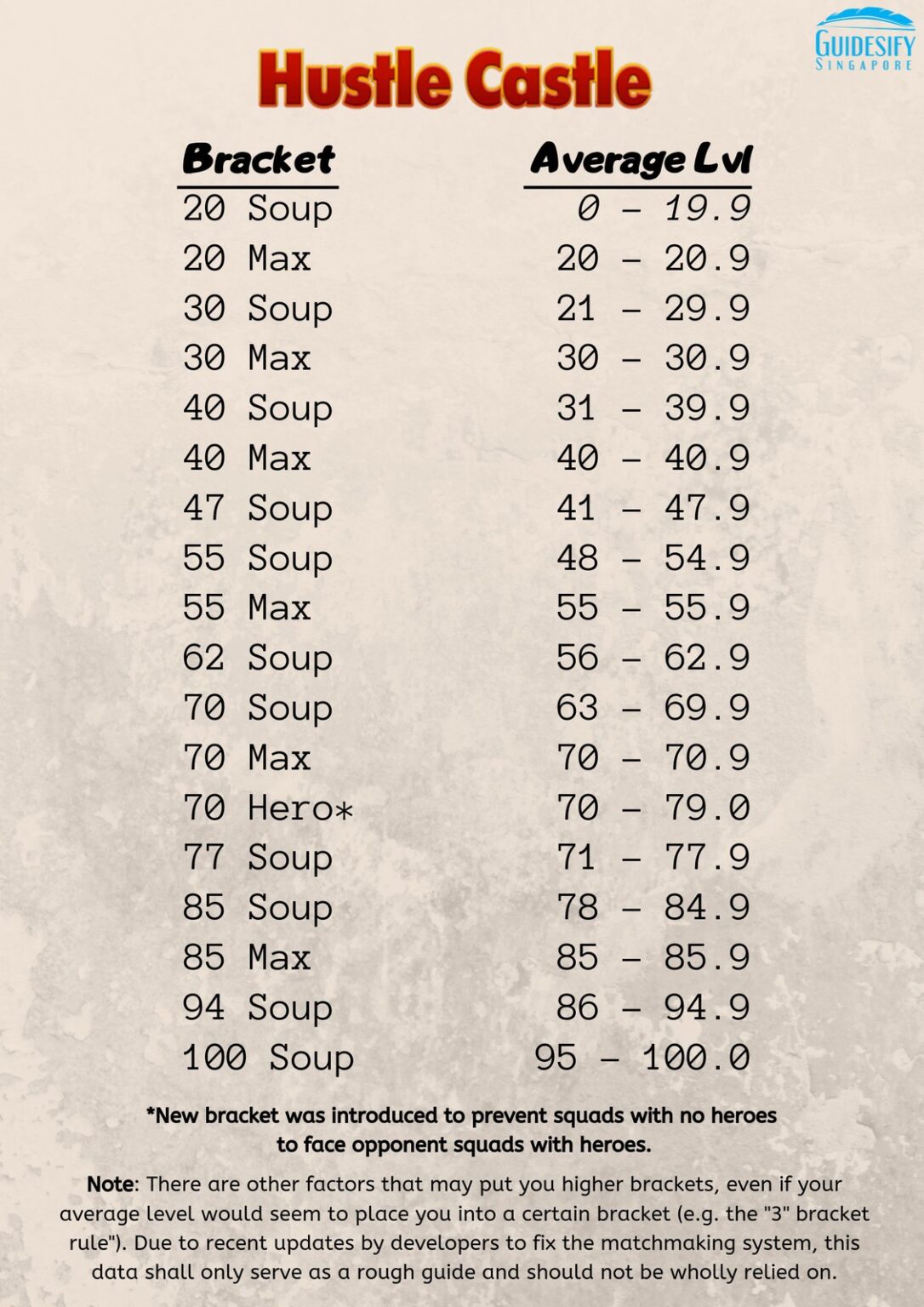 Note: Average levels are always rounded down. Also, there is no official bracket for level 100s. It will always be a mixture of full 6 x Level 10 squads and 100 Soup squads.

With this data in mind, it is easy to see why some players may choose to stay at a lower bracket for an indefinite amount of time to farm before upgrading their Throne Rooms.

In our opinion, 20 Soup and 20 Max is a hard bracket to farm legendary gear. To be competitive at this stage requires you to purchase the gear offers in-game. Events also provide a decent amount of Epics for this bracket.

On the other hand, 4 x Level 40 and 5 x Level 55 are considered to be the “sweet spots” in the game for being able to concurrently farming a ton of arena badges and shards and gear from the Soul Portal.

With the knowledge of the brackets come the ability to manipulate your bracket by combining a highly levelled fighter with lower ones to keep the average level low.

Fighter average level is determined by adding all of your top fighter levels and dividing it by the number of fighters your barracks holds. For example, if the barracks holds 5 fighters, you would find your 5 strongest fighters in the castle, add the levels up and divide by 5.

The arena will use the average of your highest fighters, even if they are not in the barracks.

In the event where the strongest fighters span 3 or more brackets, the player will be forced to the highest bracket, even if the average level is low. This is the infamous 3 Bracket Rule.

If the 3 Bracket Rule was triggered, players can still rectify the situation by slightly levelling their weakest fighter to move them into a higher bracket, and the strongest fighters will no longer span across 3 brackets.

Alternatively, you can also banish your higher trained fighters to drop back to a lower bracket. This used to not be possible in the past.

The reason for implementing the 3 bracket rule is due to the fact that higher-level fighters have the potential to dodge and crit more, giving the manipulator a significant edge over weaker players who do not manipulate brackets.

Just imagine someone having 1 level 100 fighter with the rest of his team still at level 1, he or she would have broken the game by manipulating the brackets to its extremities!

Hustle Castle’s Arena strategy is a fluid thing. It is ever-changing so long as the game implements new features such as Heroes, Gems and Runes. On the bright side, one thing never changes. You do not have to be the strongest to win. You only need brains to outsmart everyone else.

To understand why they exist, and what their purpose is, you need to first understand how the game reward victories. We will use Throne Room 10 numbers for illustration purposes.

When the board opens, players may see the points listed under each enemy, where the first row is the enemy’s current score and the second is the points players can earn from defeating the enemy.

Players are initially ranked by trophy count and all opponents reward the same amount of points of 150 upon victory, regardless of where they are placed on the board. After the first round, defeating an enemy placed above you will grant you 225 points instead, 50% higher than the regular 150 points per victory.

The max amount of points you can win from a victory drops the longer the fight takes.

I. Lose the First Round

As the name suggests, the idea here is to pass on the first round of combat, which almost guarantees the player increased points (225 points) from weak targets placed above you that would normally have been placed below you if you had played the first round.

To do this, players can simply not fight the first round at all or intentionally fighting an opponent who is out of their league. A player can potentially strike opponents above him four times and easily clinch top three if executed successfully.

Again, as the name suggests, this is the safer approach. In this strategy, players will target the weakest enemy for the first 2-3 rounds. They will only strike enemies up the board for increased points (225 points) only if the target is weak enough.

If not, these conservative players will continue striking the weakest players and ensure the maximum 150 points is earned as far as possible.

This strategy is preferred if the player’s main focus is to farm glory (blue stars that indicate clan contribution levels) instead. Placing in the top 3 is a bonus and not expected.

A variation to the “Lose the First Round” Strategy, “Targeted First Strike” is by far the most complicated strategy in the arena.

To execute this, the player must determine a target who is weak enough but has the potential to delay the fight long enough to score as low as possible in the first round.

This allows the player to earn points in round one like the “Conservative Top 3” but, at the same time, places more enemies above him or her for increased points (225 points) like “Lose the First Round”.

Tiebreakers are decided by trophies. The player with the most PvP trophies will win. This is why the Guidesify Team always participate in the arena only when the trophy count is high.

Have an assassin (high attack & crit warrior) and a tank (high hp & hp regen warrior) in your squad?

The smart thing to do is to arrange them in a way where the tank should be the fighter sustaining most of the damage done by enemies.

Ensure the tank is place before the assassin when participating in the arena. This will put the tank lower in the battlefield, allowing itself to be targeted by most enemies while the defensively weaker assassins can continue dishing out damage.