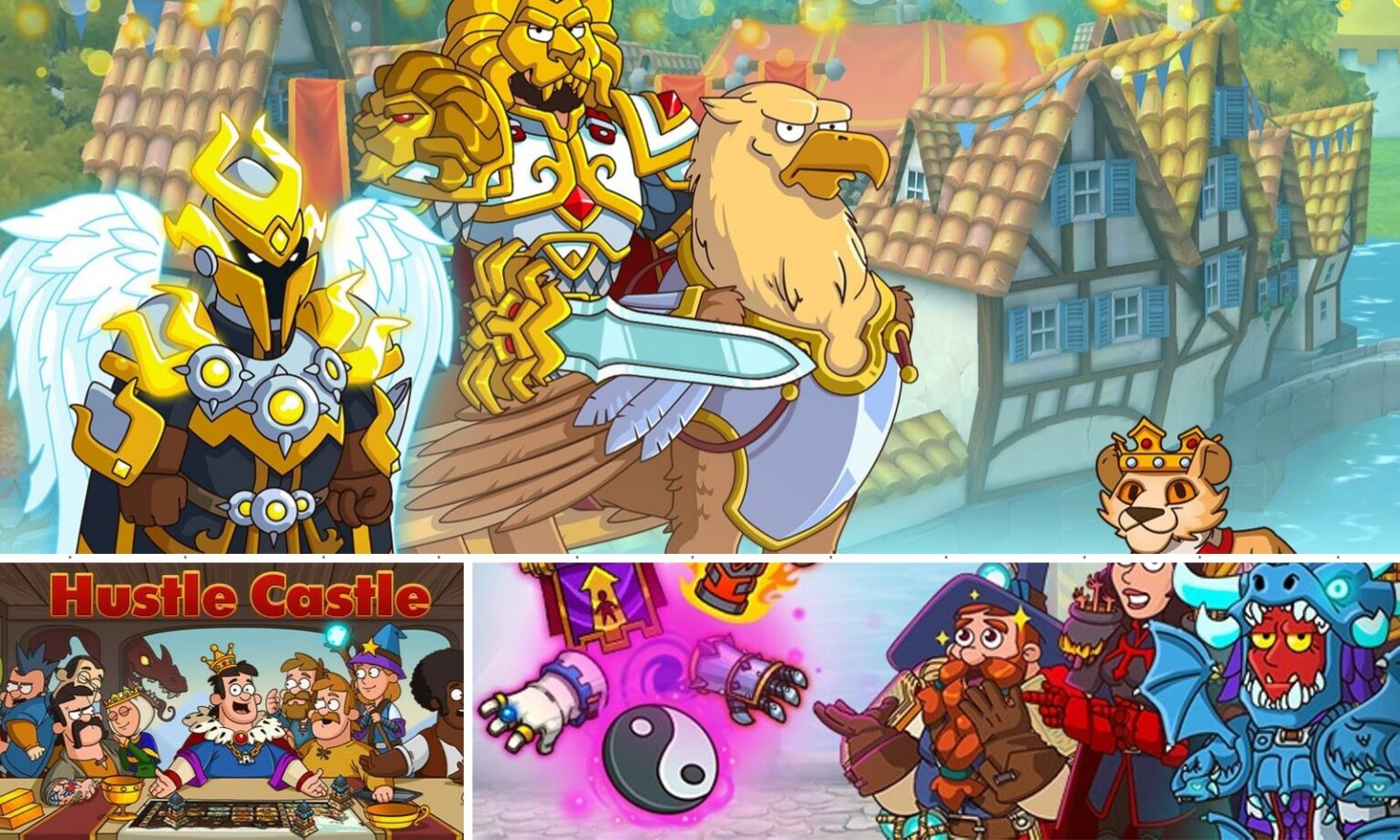 Hustle Castle, some say it’s the knockoff version of Fallout Shelter (well, it is), but over time, it has evolved considerably into a game that requires a guide of its own. Or a series of guides.

The PvP (player vs player) battles in Hustle Castle is the best way to acquire building resources: gold, wood, iron, and theoretically mana. Better than farming your own. For example, a player at Throne Level 9 (TR) can quickly raid a player for 500,000 worth of gold.

Sadly, PvP battles in Hustle Castle are designed to scale based on how frequently you win. The more you win, the harder it gets. Some players also noted that resources tend to be less too.

This serves to limit somewhat the resources one can get from PvP battles.

Nevertheless, it is possible to get heaps of resources daily from PvP battles. This guide will explain a step-by-step methodology that professional players used to get the most from PvP battles.

Important: This counter-intuitive method recommended by top tier Hustle Castle players works after a few days of following it religiously. You will not see any benefit right away and may seem to be going against what other guides are saying. The reason is simple. People who wrote those guides didn’t get that far in the game. We, however, did.

1. Premium Optional, Goblin Helper a Must!

Money makes the world go round. Says every Free-to-Play game. Ever.

It’s better if you have a premium subscription.

Guidesify doesn’ get a kickback from the developers, and we understand that many players do not want to spend a single dime on games.

Skip this section if you are hellbent on zero spendings.

A Premium account isn’t required, but it will help significantly with resource collection and PvP in general:

Dining halls will produce 20% more food each hour when you are on Premium. More foods equal more PvP battles.

II. Double the Spells You Can Craft

Spells are a must for PvP battles, especially when you are in the late game. Enemies of a similar power squad can easily defend their bases due to castle buffs and debuffs.

Without spells, you risk missing out on very lucrative but more difficult opponents on the map.

III. Extra Winnings for Every Win

You get an additional 10% resource bonus for every PvP battle win. Not bad at all.

Although this part isn’t that important if you follow our guide, save 30% of your resources from being plundered when attacked by others in PvP mode.

The hospital will heal everyone in the castle, no matter where your dweller is, even if they are still in the barracks.

This improves the flow of the game as players no longer have to deal with moving fighters in and out of the hospital. Alternatively, place the hospital right beside the barracks.

VI. Hiring a Goblin can be Free!

Goblin helpers are more useful than having a premium account. It can be free too, as long as you ration your diamonds properly.

Goblin helper is the key to accumulating enough food when you are logged in after several hours of inactivity. He will collect food from the dining halls while you are away, allowing you to do the maximum possible number of PvP battles.

2. The Secret to Being Resource-Rich: Hustle for What?

Do PvP in the morning. The map gets filled with opponents several times a day, and one of those times happens while you are asleep.

It is said that another refill happens at around 7 AM (EST). So spend your apples wisely.

In order to maximise the morning PvP haul, we recommend taking various steps right before you go to bed. The goal is to have plenty of food, spells and a low trophy count (ranking points) each morning.

I. Getting Ready for the Raid: Gem Bay

As one of the last things that you do before going to bed, take a journey in the Gem Bay and bring a full complement of 12 spells with you. It would be ideal saving one of the free gem bay trips for this purpose since it costs 200,000 apples (may vary) and 100 diamonds to do so subsequently.

You should make sure that you have as many spells as possible prepared before you go into Gem Bay. All 12 spells should be pulled from the inventory, and not from equipped combat spells.

Using spells from combat spells for Gem Bay will not allow you to craft a replacement since these spells do not add up to your inventory spell count in the first place.

Immediately exit upon entering the Gem Bay using the red X in the top right corner.

Don’t worry! This will not end the journey, and you can resume it at any time.

Go to the Magic Workshop and refill your spell crafting queue. Now here’s where the magic happens. Finish the journey, and all available spells will go back to your inventory, allowing you to store up to 30 spells in your inventory (with premium).

It is not enough to fill up your spell queue. The goal is to make sure that all spells will be available to you in the morning.

To do this, make sure you fill the Magic Workshop with skilled workers (equipped with speed-up chronometers and watchmaker suits). This will allow spell-crafting times to be cut down.

Spend any resources that you are not willing to lose:

Do not open your gifts from friends in the evening. Leave them for the morning. Same goes for the daily chest. You might want the extra food.

IV. Last but Definitely Not the Least: Empty Your Barracks

Empty your Barracks. We mean it!

Do not leave even a single person in there. This is the key to our counter-intuitive strategy since it goes completely against every guide out there, as well as the official tips from Hustle Castle developers themselves.

Trust us. You will want to get attacked as much as possible while you sleep at night.

Ranking points should ideally at the lowest point for the morning routine.

Fire Hustle Castle up. Do not do anything until checking your opponents out.

I. Grooming Opponents for Maximum Resources

In a systematic fashion, check every single one of your opponents for suitability. Look around for two things:

Resources – Keep a mental note as to what is your acceptable range of resources to use your apples on. For most players, it hovers around 100,000 gold. Skip unsuitable enemies that fall below this resource requirement.

Squad Power – Have in mind a maximum squad power that you are willing to face. If you intend to take on unsuitable enemies who are above this threshold, do note that you can only recover your wasted apples and spells three times via watching ads. 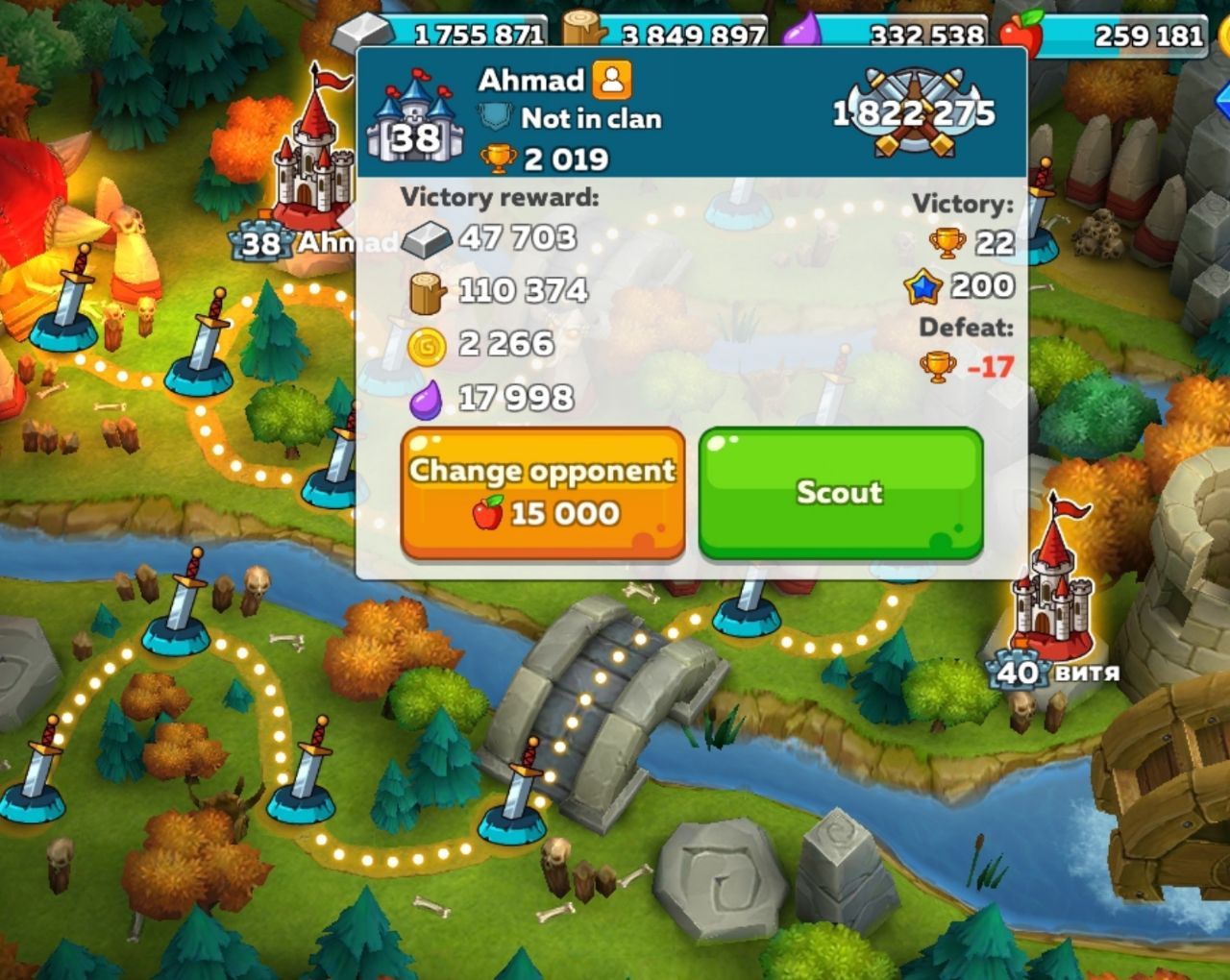 After the grooming step is done, attack the map in the same systematic fashion. Make 3 passes through the map with some form of criteria for each pass in mind.

The recommended criteria by Guidesify for each pass is:

Your criteria can differ from our recommended criteria, but you should always start with the most attractive targets first in general.

Make sure these targets are your top priority and get to them before your apples are depleted.

III. Healing Before Every Fight

Always make sure your squad is fully healed before the next fight.

Here are some suggestions for things to do while waiting for your squad to heal:

4. Bonus: Getting Revenge with a Cook and Lose!

Remember getting attacked while you were asleep with an empty barracks. Now is the time to get revenge. And lose!

Winning the revenge is not advised. As no apples were spent, revenging does not earn you any resources. The only reason the feature was added to the game was the give players the opportunity to regain lost trophies.

Let’s put the revenge feature to good use. Put a random dweller (not a fighter) in the barracks and click revenge on opponents who had raided your castle the previous night. This is the sweet part: revenge doesn’t cost a thing.

Since taking revenge is free, you can lower your trophies even further by losing on purpose. You may choose to do so before or after the morning routine, even though the Guidesify team prefers doing the former. Either option has its pros and cons.

Do not click the recover apples via watching ads button when losing revenge. You do not gain any apples for viewing the ad since there wasn’t any spent in the first place. Not to mention losing a resource recovering ad which be used for stronger and resource-filled opponents.

5. Tailor the Hustle Castle Formula to Your Own Liking

This formula works extremely well when you are early in the game as the majority of newbies in Hustle Castle will never see this article.

Now you are finished with your day’s PvP cycle, feel free to repeat a couple of similar cycles later in the day, depending on your motivation level. It is up to you now.

Ironically, even though most endgame players know about this strategy as evident from their artificially low ranking points, many do not have the habit of emptying their barracks and that is your chance to leverage on that weakness.

Some readers have claimed that this formula also works for another Fallout Shelter Knockoff named Zero City. The 2 games are extremely similar, where Redditors have alleged that Zero City is developed by the same developer, MY.com. The allegation holds true where Zero City support page continues to redirect to MY.com’s support page:

Ever Wonder How Are Country Codes Assigned?

Which Smartphone Should You Get in 2019? (Flagship Edition)