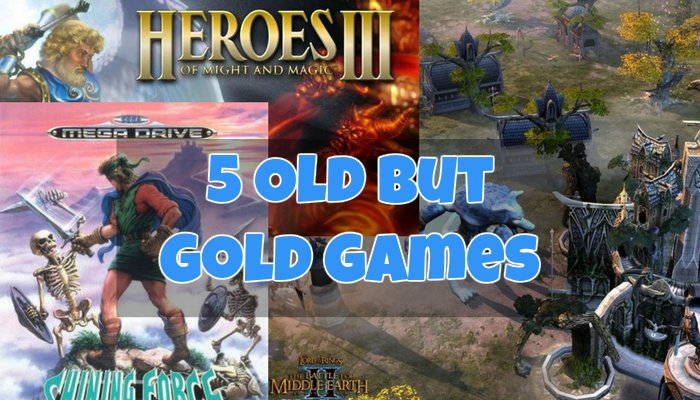 In the magical land of gaming, there was a time when we played old games and did not believe that our hobbies could be a potential professional career one day. The definition of games has been radically redefined on multiple occasions as the years go by. From Real Time Strategy (RTS) to Role-Playing Games (RPGs) to Massively-Multiplayer Online Role-Playing Games (MMORPGs) to finally Open World/Sandbox games that we see trending now, games have served us a great purpose: Entertainment. The eSports industry is booming and will continue to become even bigger in 2017. Tonnes of professional gamers have become millionaires from prize pools, advertisements and sponsorships.

Amidst the hype in the new graphics-intensive games, we retake a look into the past instead, right before gaming videos and live shows became a norm. Good games cannot get popular without the right marketing strategies; here are some old but gold classic games which you may have never heard of until now.

A series of video games created and developed by Jon Van Caneghem through New World Computing. Heroes of Might and Magic is a well-polished turn based strategy game back in the 1990s. The most notable release of this game was the 3rd instalment. It was well-received by the gaming community and probably was famous for a while. However, this game is not easy. In fact, it will be one of the hardest games you ever played.

Unfortunately, things took a turn as multiplayer gaming began to rise. Impossible to beat games slowly died off one by one and the game company which acquired the game, The 3DO Company, closed down in 2003. The licensing rights of Heroes was then sold to Ubisoft, and the game was never heard of ever since.

If you were a real fan of this series, you would remember the countless sleepless nights spent trying to devise strategies to slay dragons and demons. Heroes of Might and Magic is a game you have to play and get hooked.

A timeless classic. Played Shadow of Mordor before? Well if you are an LOTR fan, this is a game not to be missed. The Lord of The Rings, The Battle for Middle-Earth is an RTS game developed by EA Games. It received an 8.3/10 rating on IGN and was thought by many to be less hardcore. Nevertheless, it was commended for its superb design, production and development. The game uses cinematic scenes from the movies to enhance its atmosphere, visuals and sounds; it will bring a whole truckload of nostalgia while playing in Tolkien’s Universe.

The simplicity both works towards and against BFME, and may not cater well to hardcore RTS gamers. This criticism is subsequently fixed in the second and last instalment of the series, where players can build anywhere on the map as compared to only fixed locations previously.

Although not as popular as its predecessor, BFME 2 has a 9/10 rating on IGN and continued to expand the Universe of LOTR. It explored the roles of elves (Glorfindel) and dwarves in the war against Sauron, and later the rise of the Witch King in the expansion pack. Like all other RTS games, players can play both the good and evil factions. The evil campaign will play out an alternative reality and fate of the Middle-Earth.

A fantasy turn-based tactical RPG. Turn-based strategy games are probably old hat by now, but Shining Force was one of the prominent RPG games back in the 1990s. The antagonist of the game is an evil Dark Dragon, where it was previously sealed away by the ancients a thousand years ago. Just like every other sealed monster, the Dark Dragon returns to the age where the hero is born and vows to bring mass destruction and world domination. Familiar storyline huh?

Although it has few to zero puzzles and labyrinths, Shining Force was a Japanese competitor to games like Final Fantasy.

Once a fighting game that is almost as well known as Street Fighter, DOA has been on a steady decline over the years. There was even a trashy movie that was adapted from the game in 2006 called DOA: Dead or Alive.

In its glorious days, hundreds of gamers would congregate and compete at the now defunct World Cyber Games Competition. In 2005, one of our own, Wilson Chia, won a silver medal for Singapore in the DOA category.

The latest release of the video game series is a volleyball sequel that has been frowned upon by many. We suggest not to watch the extremely suggestive trailer below.

Raiden is a classic where kids spend the whole day at the arcade tossing their coins away. It is the first of many scrolling shooter games where a single supersonic aircraft is tasked to destroy hordes and waves of aliens. The first version of the Raiden consists of a total of 8 missions. The player will manoeuvre the Raiden craft via joysticks or arrow keys to evade thousands of bullets and other hostile elements.

Raiden is the kind of game that people will play on their mobile devices and compete with their friends nowadays. Aside from the fact that the original was a lot harder to beat in the past.