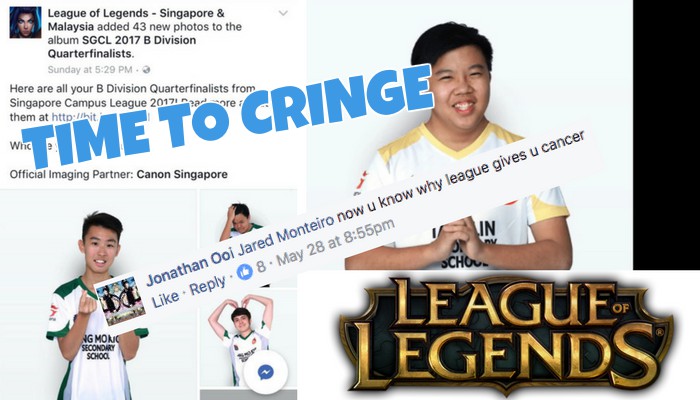 In today’s cringe-worthy news, we have stumbled upon a new Facebook Album posted by the League of Legends – Singapore & Malaysia on 28 May 2017. The album consisted of the B Division Quarterfinalists for this year’s Singapore Campus League. It has received hundreds of engagements in just three days, but mostly for the wrong reasons.

It’s an unspoken truth that many Singaporeans are increasingly attracted to cringe and are more susceptible to sharing it. We are uncertain whether this was done intentionally as a form of publicity. Anyway, enjoy the comments (Warning: Toxic).

Most comments expressed the same reaction…it gave us cancer too. “When ur parents give u $0.60 daily allowance but u hav to remind them ur in secondary sch now” – Malcolm Chew Jh

This is not the first and definitely not the last “player pose”. Redditors stated that games like League of Legends, Dota 2 and Overwatch have been forcing these professional players to do poses like this. It is claimed that the purpose of doing this is to add intensity.

With eSports becoming a booming industry, gaming companies are desperately trying to legitimise themselves to the world as a real sport. However, forcing their players to imitate gestures taken from popular games and repeatedly label themselves a sport in broadcasts is the cringy part itself.

Take a look at past player intro videos that went viral due to its cringe factor:

At the end of the day, we can cringe all we want. There is quite a possibility that these gamers will or are already earning more than most of us. With increased sponsorship revenue and surges in prize money every year, we have completely and utterly lost track of how much these professional gamers earn.

In other totally unrelated but interesting news:

• All You Need to Know about the Bishan Gay