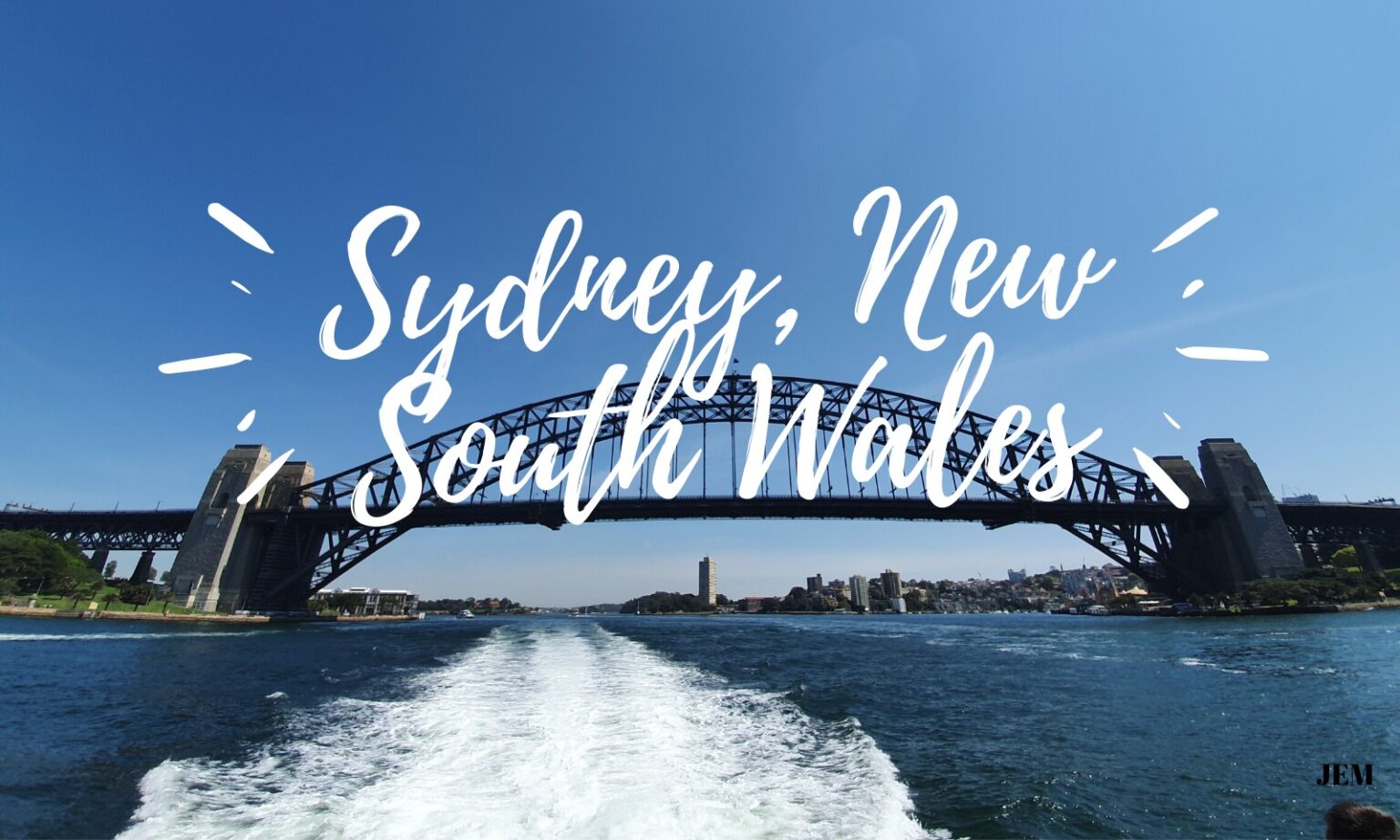 Sydney, the state capital of New South Wales, Australia. It is also the city where most non-Australians are confused with as the capital of Australia. That’s Canberra by the way.

Sydney is a vibrant city praised for its rich multicultural heritage that contributes to its diverse culture and exciting arts scene. There are just so many things to do in this city!

This is why it can be hard picking the best things to do in Sydney for your travel itinerary but it’s alright. We got you covered!

Below are 13 handpicked attractions and things to do in Sydney Australia which we think would be worthwhile for your time… and wallet. 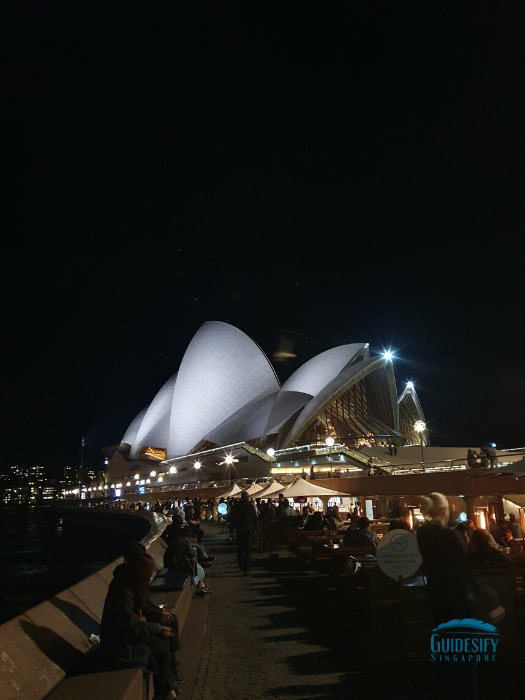 The iconic Sydney Opera House definitely deserve being at the top of our list. Do make a visit to the UNESCO World Heritage-listed attraction and be absolutely amazed by its breathtaking architecture!

With more than 1,600 shows and performances held every year at the opera house to choose from, why not book a show or a backstage tour in advance? If you are feeling rich that is.

Once you are in, the grandeur of the concert halls will leave you speechless. There are no words to describe it.

During our visit, the show of the season was West Side Story, a Broadway classic.

2. Sydney Harbour Bridge – No, You Don’t Have to Climb it 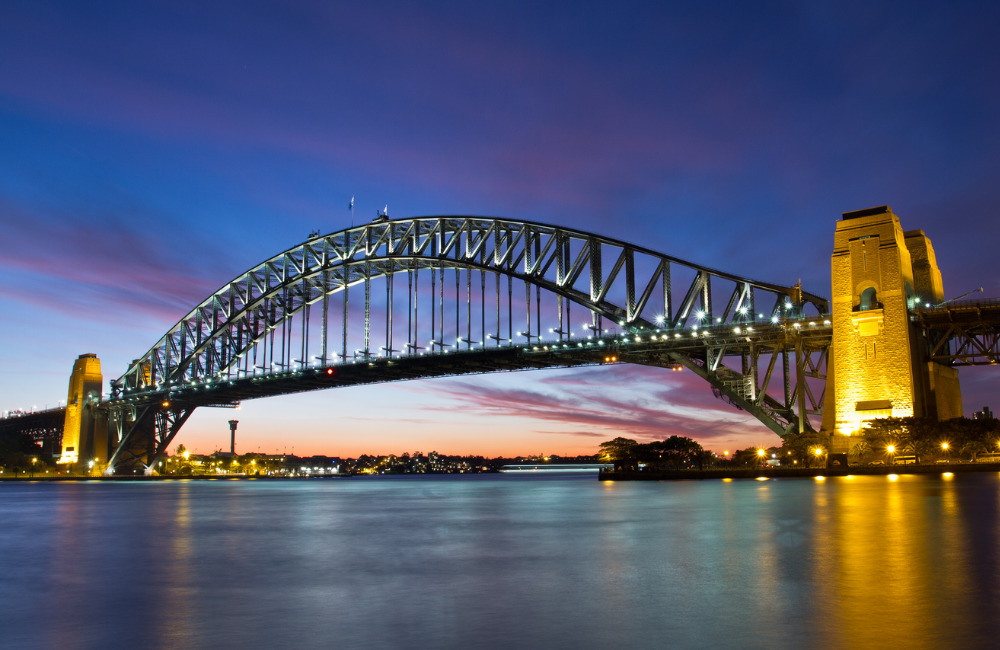 The dramatic landscape of the bridge, the harbour, and the nearby Sydney Opera House is the view you must catch in Sydney, and Australia itself.

Also nicknamed “The Coathanger” because of its unique arch-based design, we recommend visiting the bridge once in the day and then again at night, as both offer impressive views of the city.

You may also choose to climb the bridge and the night climbing experience has proven itself to be rather worthwhile and safe. It is, however, a tad expensive where tickets start from 268 AUD.

Don’t have the time or money? Take the free pedestrian walkway instead. It should take around 15-30 mins, depending on the stops you take while admiring the harbour.

3. Whale Watching – Marvel at Whales and Dolphins in Their Natural Habitat 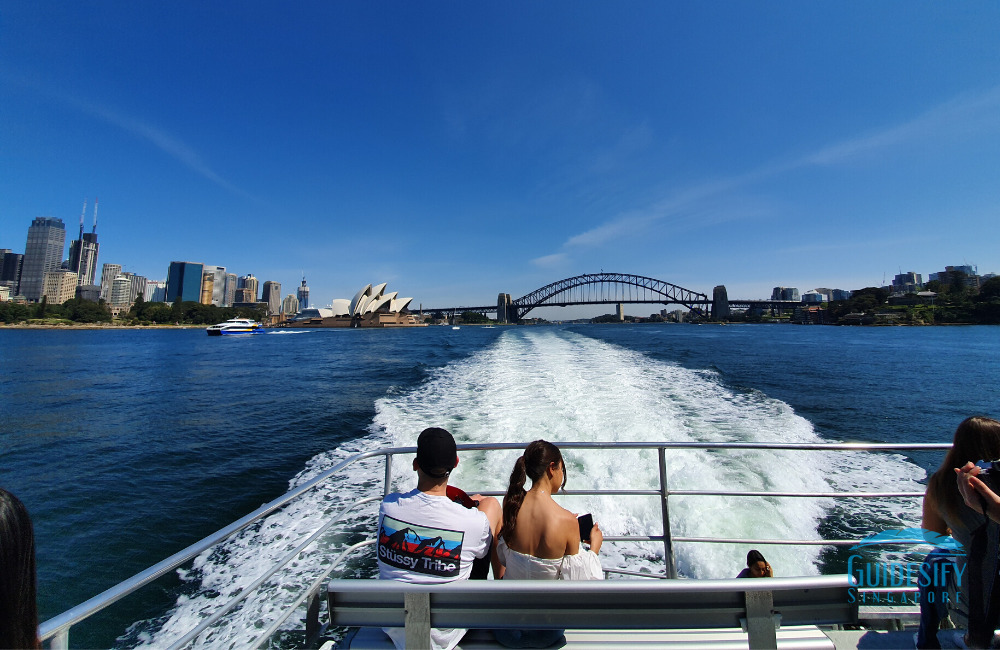 There are many places around the world where you can observe whales but here’s best part about whale watching in Sydney other than being able to see these magnificent creatures in their element, your cruise will pass iconic attractions – the Sydney Opera House and the Harbour Bridge.

Every year from May to August, thousands of whales migrate past the city as they head for the warmer waters of Queensland to calve and breed. They then return on their Southern migration from August to November.

They are many different operators that offer whale watching that depart from Darling Harbour. If you’re lucky enough, you may spot not only humpback whales but dolphins, orcas and other marine life.

Of course, it isn’t guaranteed that you will see wildlife because well, they are wildlife after all! But fortunately, the chances are definitely high. We personally went whale watching in 2019 and back in 2017 and saw whales on both occasions! Most providers also offer a 100% whale sighting guarantee, which means that in the unfortunate event no whale was sighted, you would be given a complimentary return cruise.

Watch: Whale jumps out of nowhere during a sightseeing tour.

No actually he’s home, you came out of nowhere

Hope you are lucky enough to catch the humpback whales breaching! It is simply an eye-opener! 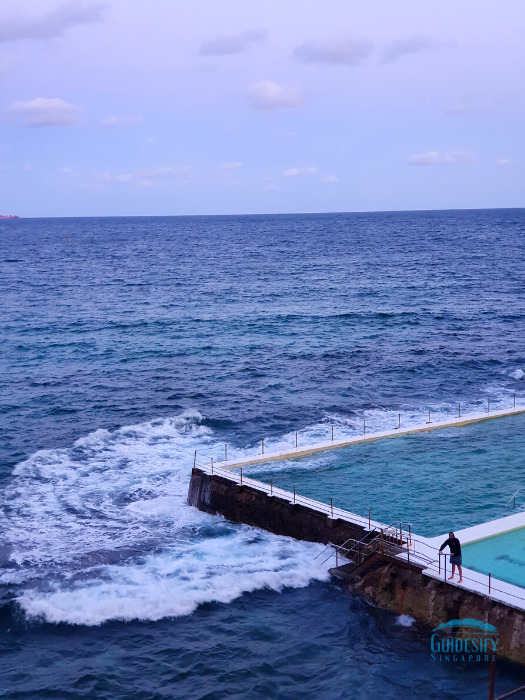 One of the most famous walks in Sydney.

The Bondi Beach is also the home of the Australian famous television programme – Bondi Rescue. Check out Conan O’Brien’s remote with the stars of Bondi Rescue!

The Coogee to Bondi Beach Walk is a 6 km cliff top coastal walk and you can start from either beach, depending on which is more convenient. There will be some steep gradient paths and staircases that can leave you huffing and puffing within minutes. So do be in the right attire and wear some comfy shoes.

While you are there, feel free to make stops along the way where the walk offers many scenic cliff/bay views, cafe, restaurants and if you are lucky, dolphins. The beaches can be teeming with surfers too.

Be sure to stop by the extraordinary Bondi Iceberg Club and snap a photo of the waves crashing against its main pool! The pools are also open to the public all year round. 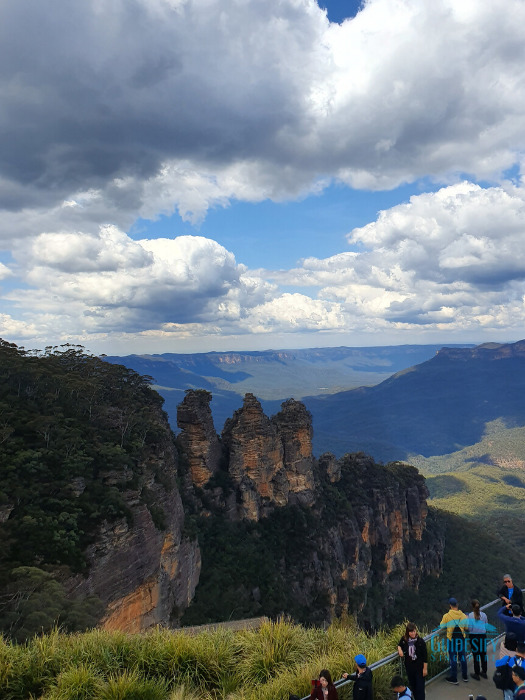 Isn’t hard to believe that just a stone’s throw away from Sydney lies a World Heritage Area that stretches for more than a million hectares?

We’re talking about the Greater Blue Mountains Heritage Area, which consists of the Blue Mountains and several National Park. The mountains are ideal for a day trip out of the city but you can also choose to experience the whole area for a couple of days.

The train from Central Station in Sydney takes out 2 hours and alight at the Katoomba Station – The main town near the mountains. From there, you can take a public bus 686 or the Blue Mountains Explorer Bus (which includes live commentary) to Echo Point! There are several express trains from Central Station that do not stop at stops before reaching your destination so do check the timings beforehand.

Some other main attractions also include the Jenolan Caves and Scenic World Blue Mountains, so do make your bookings in advance! Whether it’s bushwalking, sightseeing or hiking, the Blue Mountains Heritage Area truly offers everything for nature-lovers. 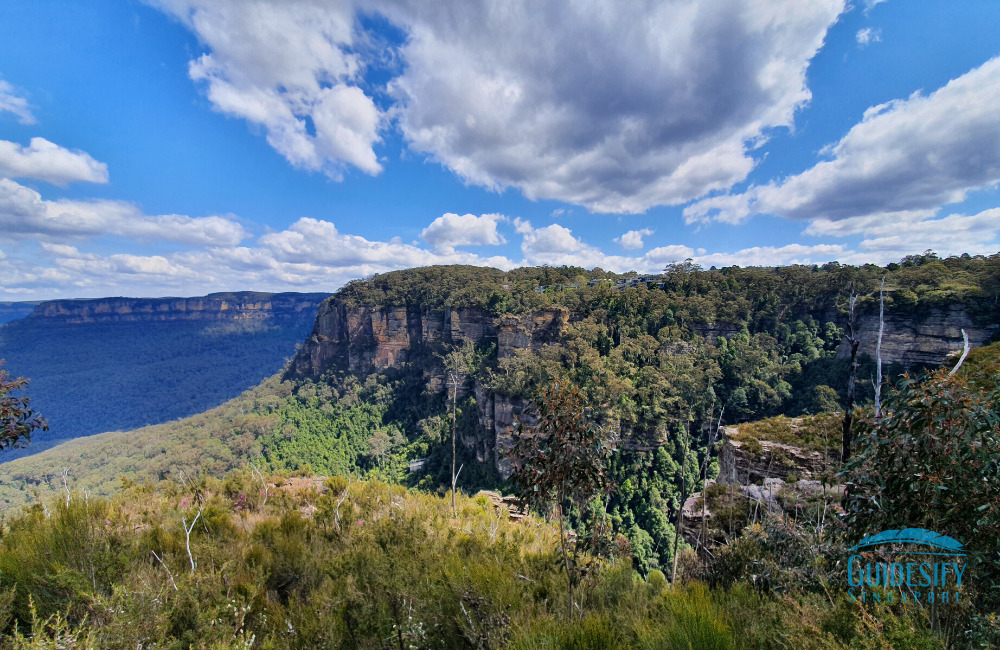 According to Tourism Australia, if you’re wondering how the Blue Mountains got named, it’s because of the distinctive blue haze caused by the scattered rays of light contacting dust particles and droplets of oil dispersed from the eucalyptus trees! 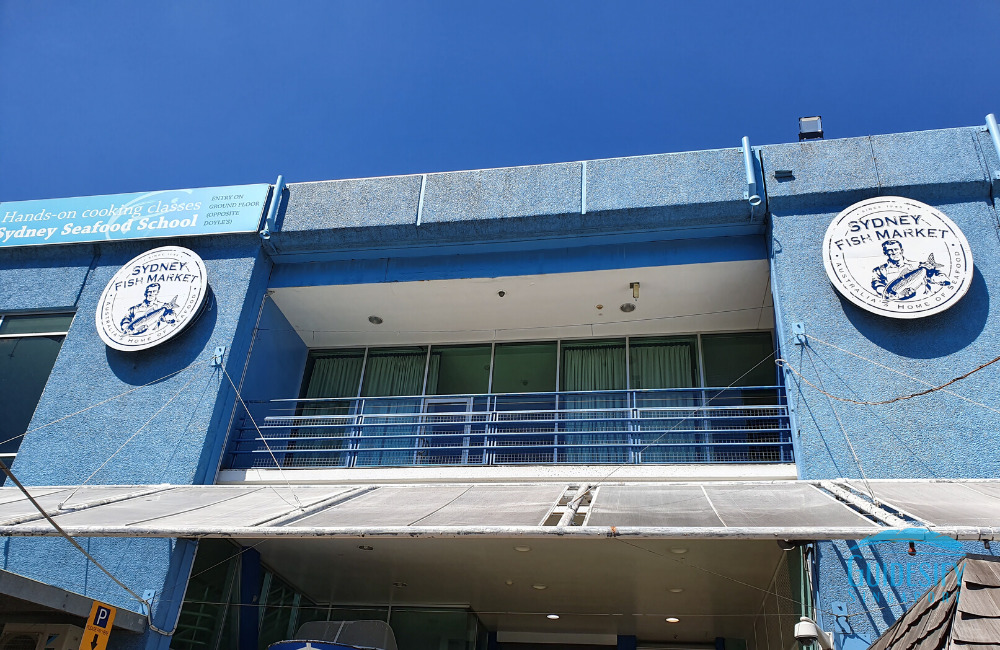 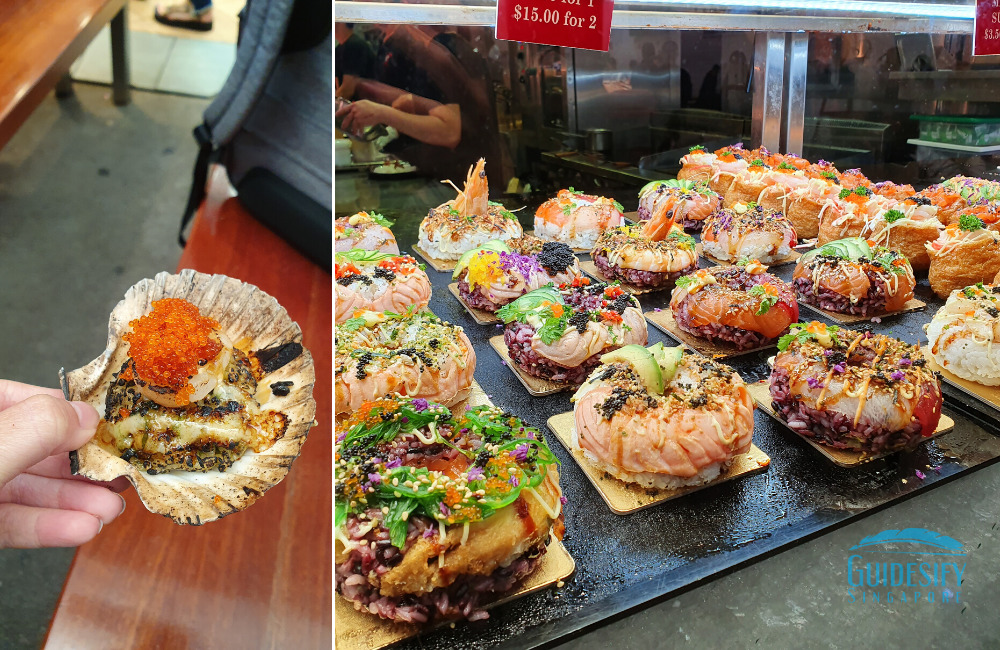 The Sydney Fish Market isn’t just famous for its “Sushi Donuts” or its earned title of being the largest seafood market in the Southern hemisphere. In fact, the scallops that we had there completely outmatched any of the seafood (including the donuts) we have tasted at the market. But that’s just our two cents.

The onsite food service is also pretty impressive. Once you have selected the fresh seafood for lunch at any of the retailers, the food will be cooked on demand and served to you piping hot!

That’s not all for all our Singaporean foodies. There is also Yum Cha in the area, which we regrettably did not try.

8 More Things to Do in Sydney

7. Grounds of Alexandria – One Cafe to Rule Them All! 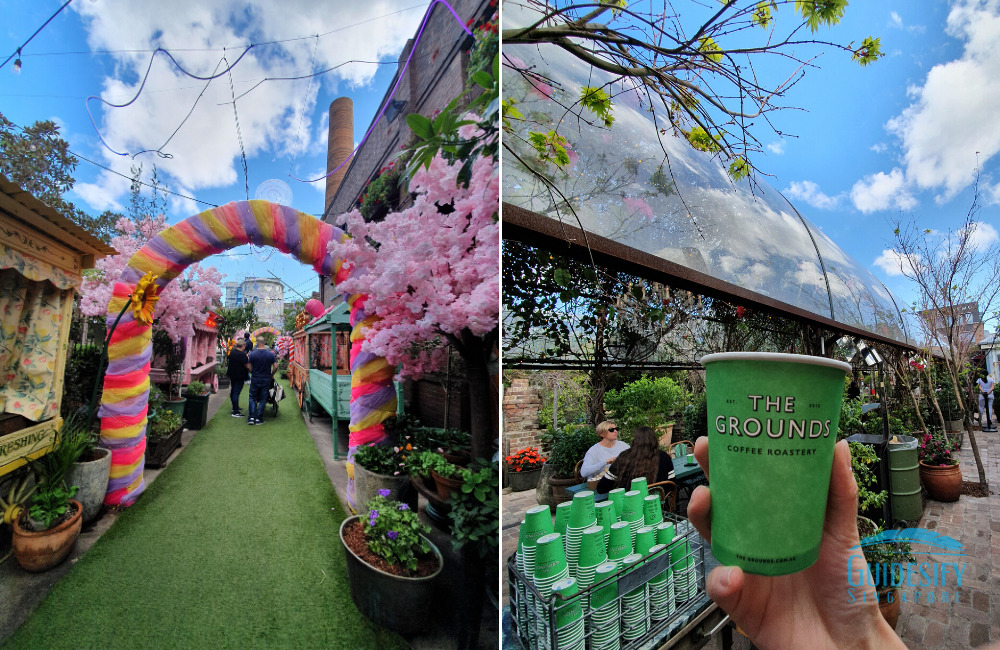 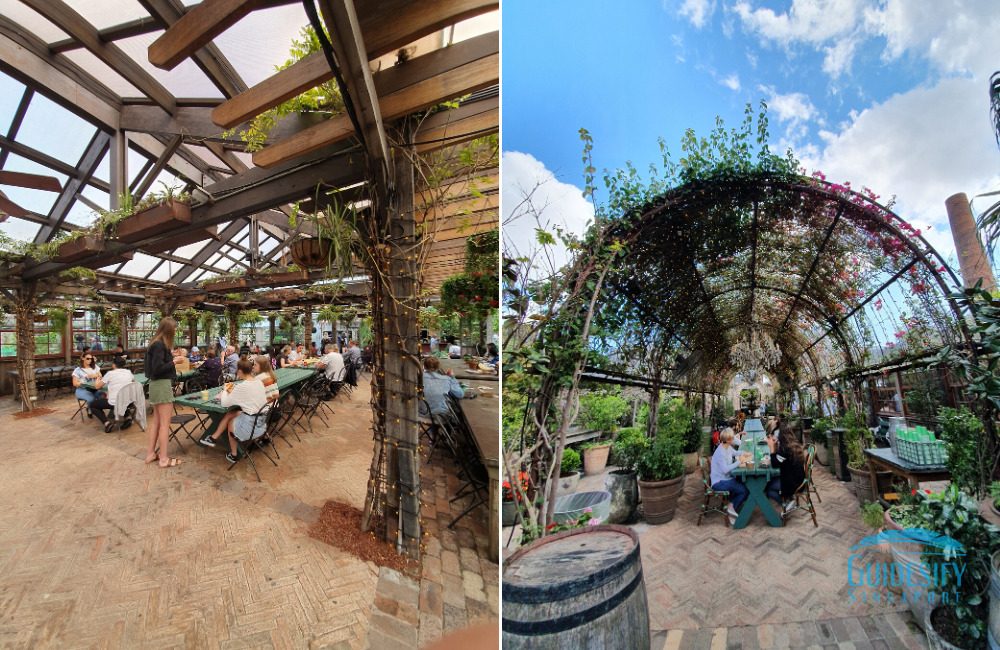 All these pictures indeed tell a thousand words. The Grounds of Alexandria is a must-go destination in Sydney. It is a landmark cafe, restaurant & bar, garden, bakery & patisserie, coffee roastery, animal farm, florist, markets and more.

Alexandria is a just a few train stops away from Central and about 15-minute walk away from the station but it is recommended to take an Ola or Didi here as it honestly saves a lot of time!

This urban sanctuary is perfect for your Instagram feed and it is almost like a mini playground for kids and adults, it’s just so green with fresh vibes to it. To add on to that, they have many events and workshops held throughout the year, ranging from coffee workshops to styling classes. 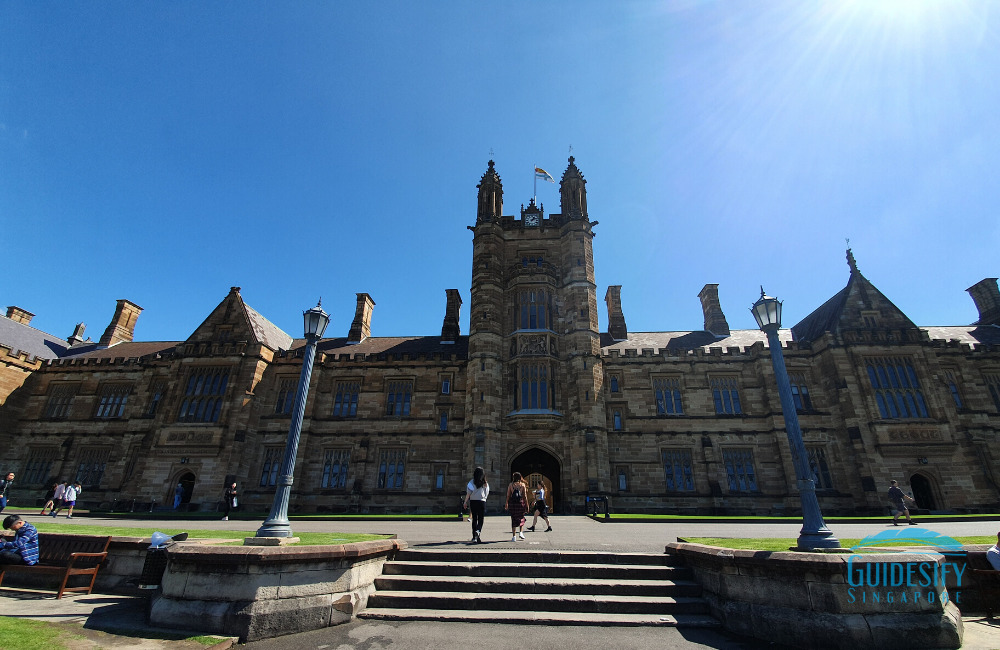 It may not be the best University in the world, but the University of Sydney may very well top the list in terms of architecture.

The centuries-old but well-maintained buildings are the results of the University’s long respectable history. Main highlights of the campus include the Quadrangle and the Great Hall, where most graduations and exams are held at.

Imagine graduating at such a grand location! Not in Singapore!

This is probably the closest you can get to the Hogwarts School of Witchcraft and Wizardry in the Southern hemisphere.

9. Darling Habour – There May be Fireworks! 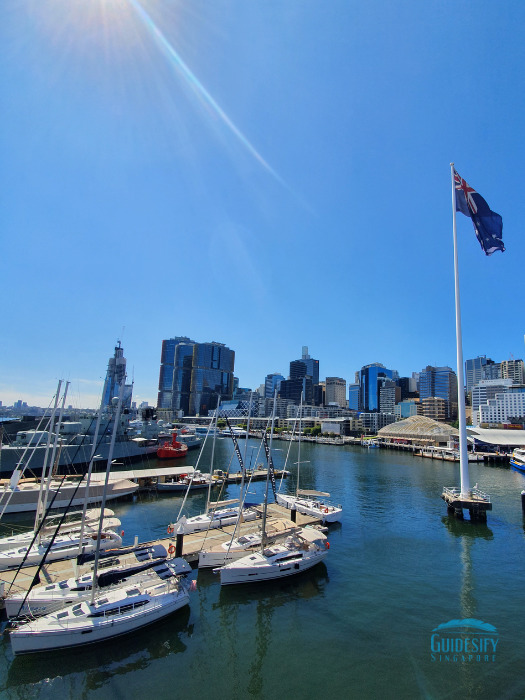 Situated near the Sydney CBD, the Darling Harbour is probably the world’s most beautiful harbour. Many ferries depart from here daily.

The Darling Square is only a few minutes walk away from the harbour and is home to world-class dining, bars, cultural and educational institution.

If you’re there on a Saturday, grab yourself a ringside seat around Cockle Bay and have fun watching the fireworks display in Darling Harbour! The fireworks are scheduled every Saturday. 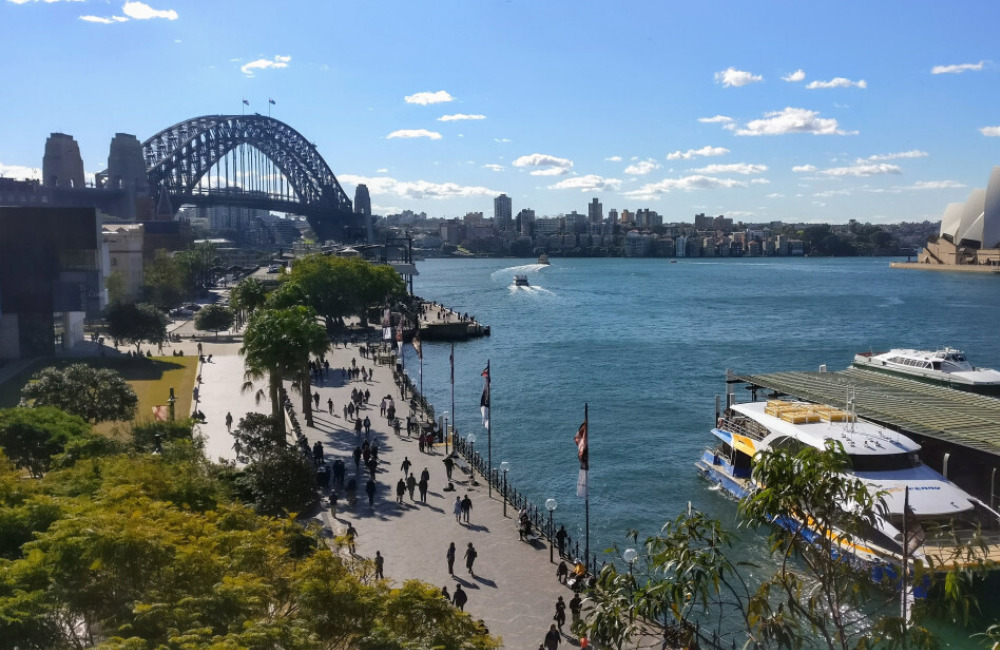 A harbour known for its exquisite collection of restaurants, tourists facilities and buskers, the Circular Quay is a great place to check out too. It is a transport hub that interconnects buses, trains and ferries and also connects tourists to Sydney major attractions: major attractions: The Sydney Harbour Bridge, The Rocks and Sydney Opera House.

You may choose to watch the sheer number of cruise ships/ferries arrive and depart the colourful port.

We had dinner at Hurricane’s Grill and was served easily the best steaks and ribs in the Southern hemisphere! 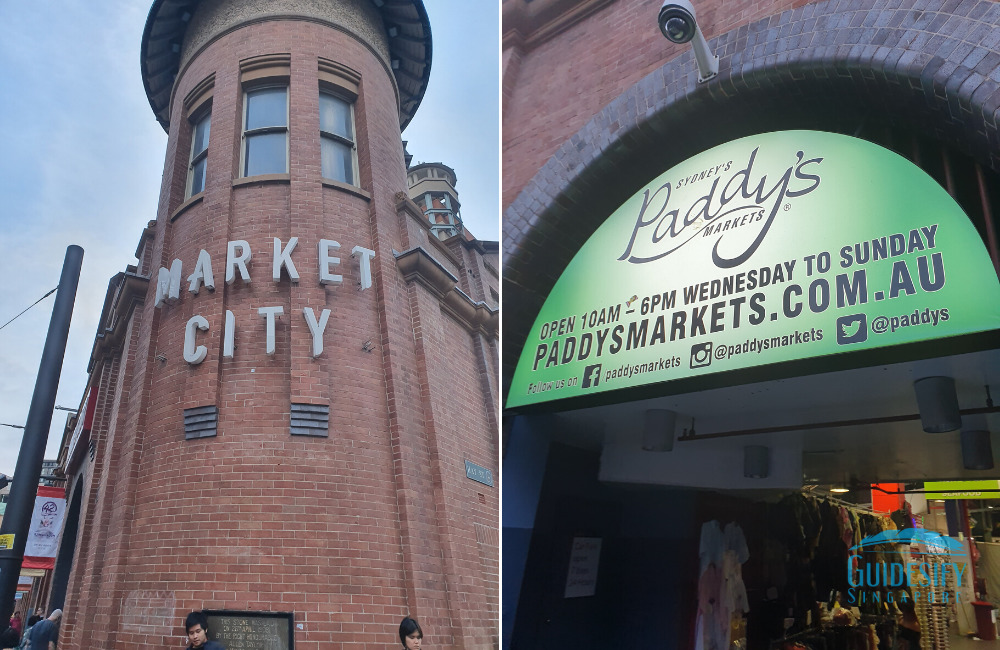 Thinking of getting koala and kangaroo souvenirs? Ditch those over-priced souvenir stores and come to the Paddy’s Market!

With over a thousand stalls between the Haymarket and Flemington locations, you will find T-shirts, hats, key chains, fridge magnets, bags, soft toys, etc. Besides souvenirs, there is also a fresh produce market and a fish market too.

12. Taronga Zoo – Not by Steve Irwin, But Still Good 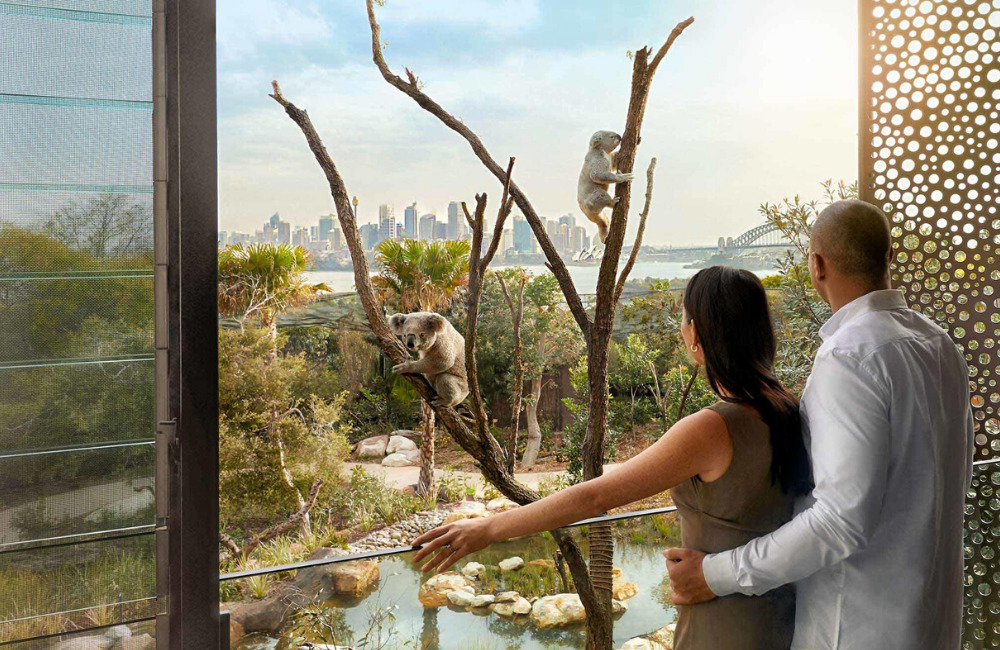 The Zoo is commonly accessed by ferry from either Darling Harbour or Circular Quay.

It has a rich diversity of animals from over 350 species, where many of which are threatened or even critically endangered!

Want to spend more time with wildlife? There are luxurious and safari-styled options for you to choose from, and enjoy your immersive stay with wildlife while gazing across the stunning Sydney Harbour.

If it’s your birthday that day, it’s your lucky day! Visit the zoo for the price of just one gold coin. That’s 1 AUD. 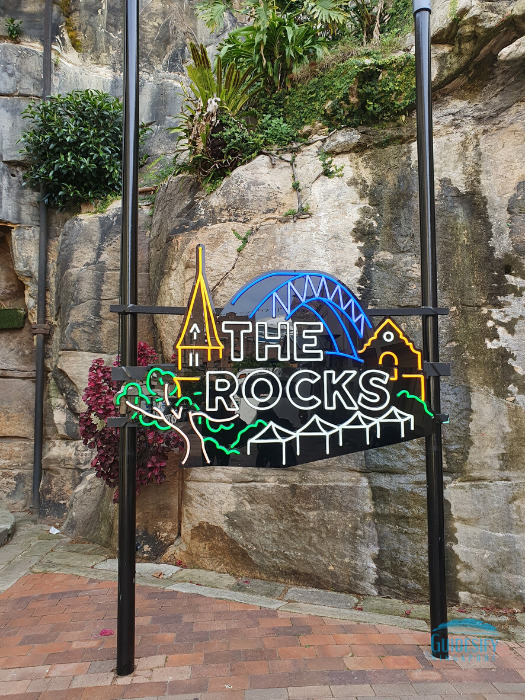 Take a stroll down the cobblestone streets of The Rocks, the place where Sydney began.

On Fridays to Sundays, the streets will be filled with bustling market stalls as The Rocks Markets feature a carefully selected pool of artists and crafters.

Not a fan of handcrafted jewellery and unique homeware?

Grab a bite and spoil yourself from a range of over 50 cafes, restaurants and hotels to choose from.

This island is another UNESCO World Heritage Site in Sydney.

It is a former convict penal establishment and then transformed ship dockyard. Now, the Cockatoo island is a popular art and entertainment venue, where it has even hosted Lorde’s live performances. 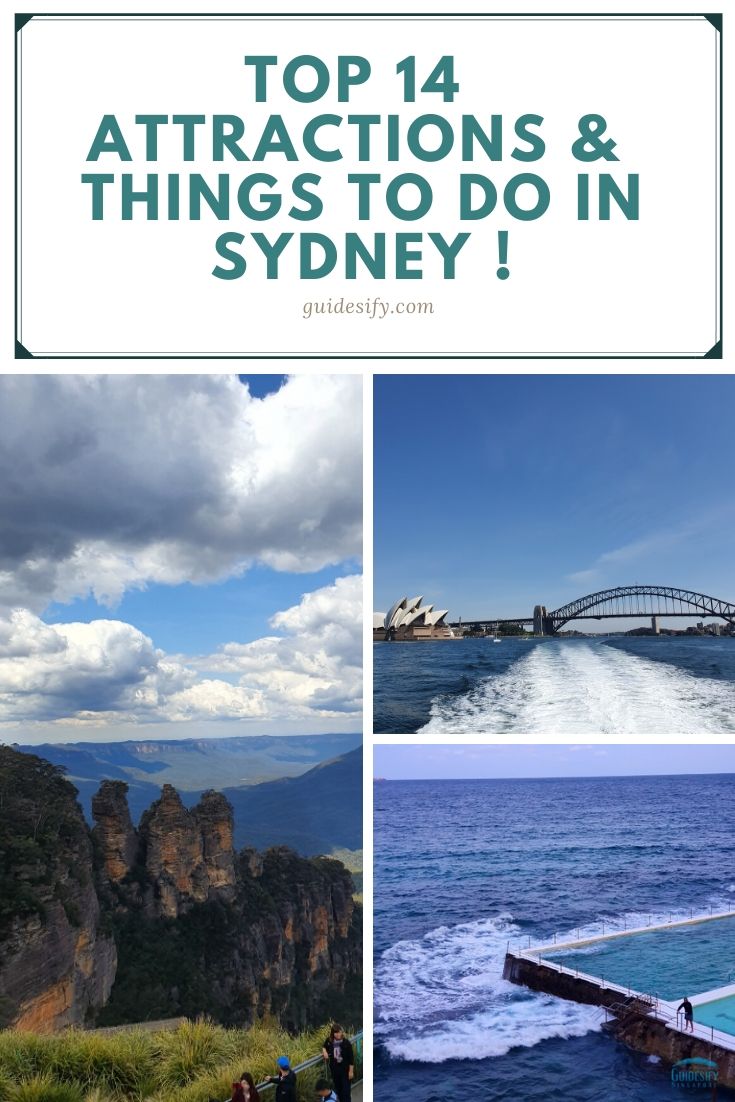