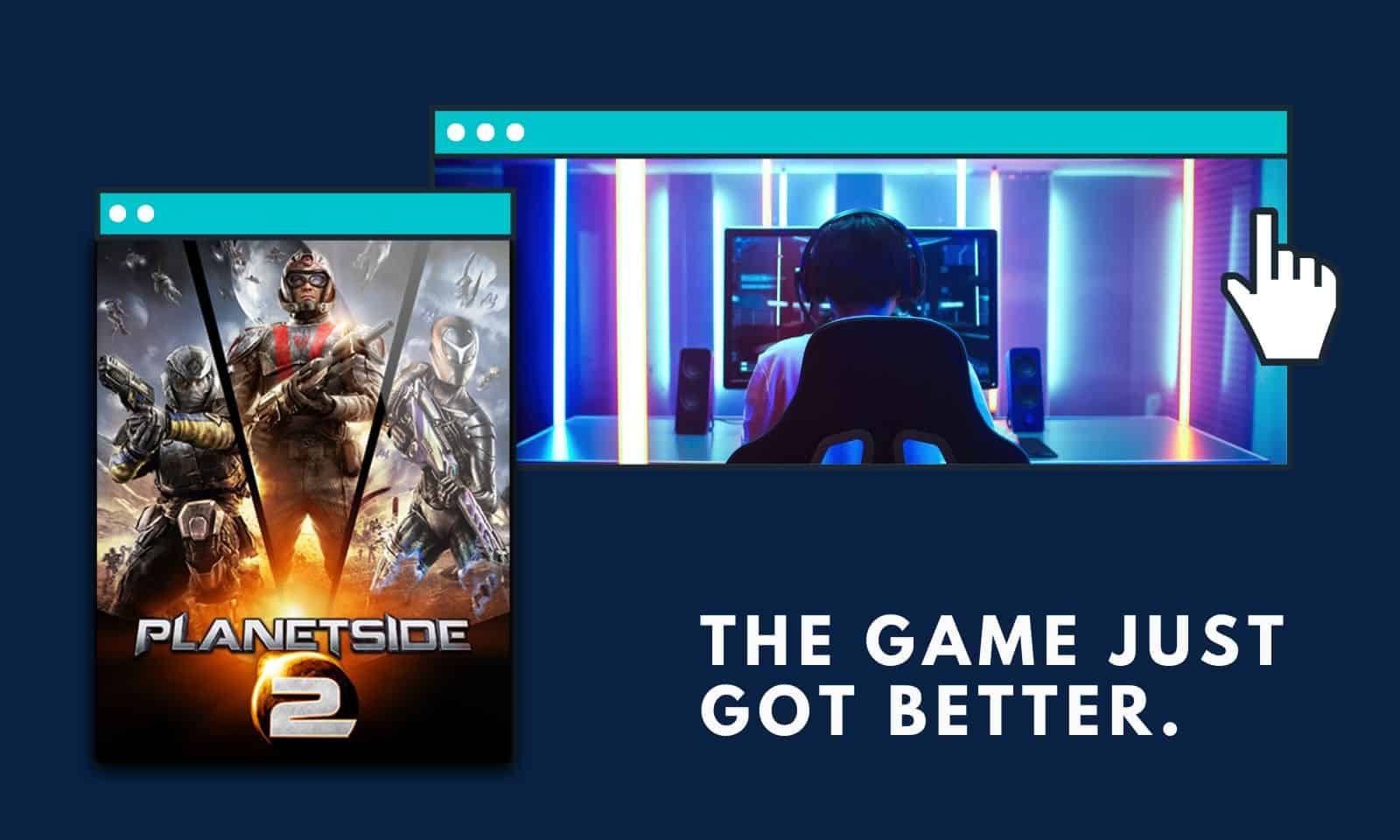 Imagine yourself as a soldier among hundreds of infantry and tanks, shooting across no man’s land
with countless projectiles flying overhead, and a massive starship above you escorted by a swarm of
fighter aircraft, raining hell down upon your foes in a Star Wars-esque combined arms war…This is
Planetside 2.

Planetside 2 is a Free-to-Play Massively Multiplayer Online First-Person Shooter (MMOFPS) and the only one of its kind. In Planetside 2, the war takes place on the planet Auraxis, with three factions fighting for control over territory or “hexes” in a persistent open-world warzone.

Planetside 2 sets itself apart from other titles as it is not limited to 64 players per map but allows up to a thousand players in a single instance. During peak times, it is not uncommon to see hundreds of players fighting amongst each other in a single hex, with three-way fights happening on occasion.

Due to its sheer scale and ability to create epic action-packed moments that require split-second reactions, the battles produced in Planetside 2 are simply unrivalled in today’s FPS market, a result of a gazillion things happening all at once.

For the Glory, Planetside 2 gameplay cinematic by CAMIKAZE78

Players fight with various assets such as tanks and aircraft at their disposal and progress through the game by purchasing and upgrading equipment with in-game currency. Thanks to its wide arsenal of weapons, vehicles, abilities, and equipment, Planetside 2 offers a vast variety of playstyles, ensuring that there will always be something fresh to explore.

Even after sinking more than 700 hours into the game, I still find myself discovering new playstyles to experiment with.

When outfits (the game’s version of guilds or clans) have gathered enough resources, they can “pull” these war assets, turning the tides of war just with its presence while providing a huge morale boost for friendlies on the ground.

Unforgettable epic battles straight out of a Star Wars movie

Throughout my time playing since the escalation update, I have witnessed and fought in battles that were truly unforgettable.

There I was, an insignificant foot soldier on the ground, advancing towards a base with a platoon of friendly tanks rolling alongside. Then, I heard the scream of fighter aircraft and looked up at the sky. There it was, the sight of two Bastions shooting at each other along with their swarms of escort fighters dogfighting in the sky. It was a scene straight from Star Wars, the opening of Revenge of the Sith. Soon enough, I participated in one of these Bastion battles as a fighter pilot myself and the experience was unlike any other.

Of course, the Planetside experience would not be complete without simply kicking back and taking in the beautiful scenery that the game has to offer.

Sometimes, I find myself stopping along the ridge of a mountain just to admire the view.

Planetside 2 has come a long way by making it easier for new players to compete with seasoned players in terms of infantry equipment.

By picking the heavy assault class, new players are given nanoweave armour rank 5 for free, bypassing the initial grind. Moreover, the game has a generous list of free items for new players with codes that unlock new weapons and cosmetics, further levelling the playing field.

However, the same cannot be said for vehicles as players would have to save up in-game currency called certification points to upgrade them.

Thankfully, with recent changes, Planetside 2 has made it much easier to obtain certification points, allowing new players to catch up quickly.

It’s free-to-play and NOT pay-to-win!

Monetisation in a Free-to-Play (F2P) game has always been a point of contention with many saying that free-to-play games are essentially pay-to-win.

In Planetside 2 however, all gameplay-related items can be unlocked just by playing and paying real money will not grant the player a gameplay advantage.

As an F2P player myself up until recently (I bought cosmetic items), I have never found it tiring to grind for a new weapon or upgrade, especially with the new methods of obtaining boosts to speed up the grind.

After seeing all the epic battles on YouTube, I remember trying the game out years as a fresh recruit. Be warned, this game is not for the faint of heart as it has one of the steepest learning curves, even for those with prior FPS experience.

During my first hour, I died repeatedly, seemingly out of nowhere. Even as a decent FPS player in other games, I managed to get my first kill only after an entire hour. It was a gruelling but satisfying experience.

Thankfully, my efforts paid off as my kills per hour started to go up exponentially and I started to really enjoy the game once I started to figure things out.

As a new player, there are a lot of things to learn. A good way to start is to check Noggig’s beginner’s guide here. Joining an outfit is also a great way to learn from fellow outfit mates and also enjoy the full planetside experience.

The Planetside 2 discord is the gateway to joining outfits and asking questions about the game.

For those who live in Asia and would like to join an English-speaking outfit, I would suggest joining The Last Ravens on the Soltech server.

Writer’s experience as a long-time player

These days, especially after joining an outfit, I find myself playing Planetside 2 for hours on end, with playtimes exceeding 7 hours during the days when my outfit has organised operations or “Ops night” as we call it.

I’m constantly excited to join my outfit for Ops and relish every minute from the time we gather for a pre-Ops briefing, to the very moment my squad drops from a Galaxy (the game’s C-130) into the fray of battle to secure an objective. It makes me feel like a true ODST from Halo as our small 12-man squad descends feet first into hell.

Witnessing hundreds of players move towards the next base makes you feel like a part of something bigger, bringing a huge sense of camaraderie that no other game can match.

The Planetside experience never gets old!

With the latest updates in 2020, Planetside 2 is seeing a huge resurgence and the game has never been better! So pick up your weapon and see you on the battlefields of Auraxis!

Home » Gaming » Move Over Battlefield, Planetside 2 Just Got Bigger in 2020