A Recap Of Year 2017: Events of Yesteryear 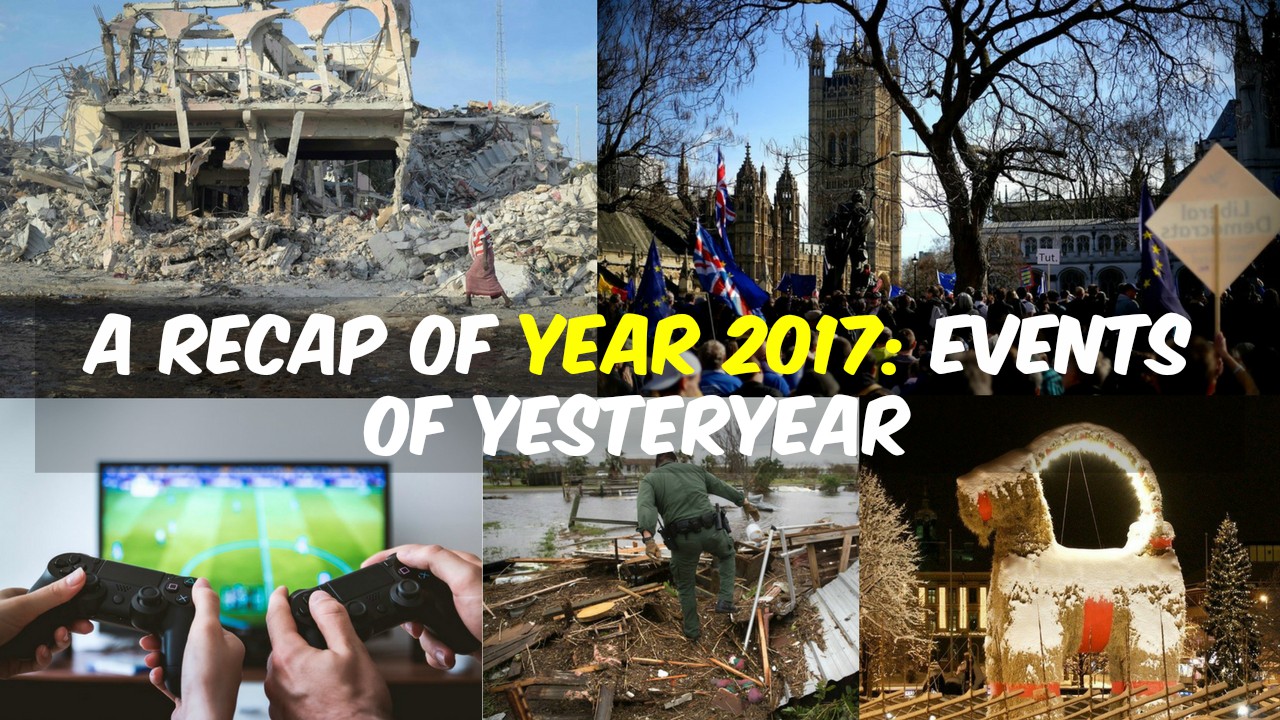 Happy New Year to you all!

As the fireworks and celebrations die down, heralding the end of 2017, do you really still remember everything that happened last year? Let’s take a look before we embark on our 2018 Odyssey.

Power Struggle in the West 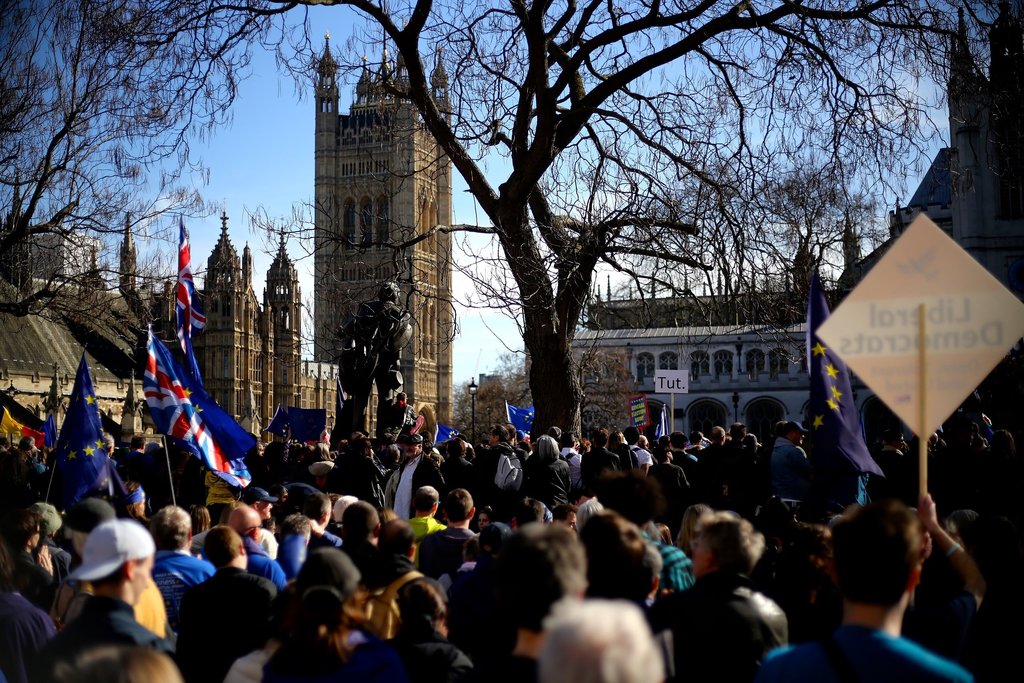 Say what you want about Trump. Whether you are a hot-headed liberal vying for change or feminist rooting for Hillary Clinton, Trump was a brilliant start to 2017. The boiling debates stewing over the tail-end of 2016, finally culminating in his inauguration as POTUS, was an exciting event even for non-Americans.

There were protests, debates, and best of all, memes. Netizens could not pass up the golden opportunity to mock this figure and his ridiculous hair, and for months, all the Internet could do was making videos and images satirising his manner, family, his famous wall, and even his stint in professional wrestling. It was a truly memorable election and a promising start for the year.

And, just a body of water away, trouble brews in the UK: Brexit.

When the United Kingdom announced leaving the EU for good, then PM David Cameron added more fuel to the conversation by announcing his retirement if Brexit were to happen. Who could forget that tense moment when the British pound dropped dramatically following a close 51.9% victory in favour for leaving the EU, and as Europeans alike discussed hot-button topics such as the refugee crisis, immigration and employment?

It divided the nation just like the presidential election had divided the United States, and will still be debated this year. 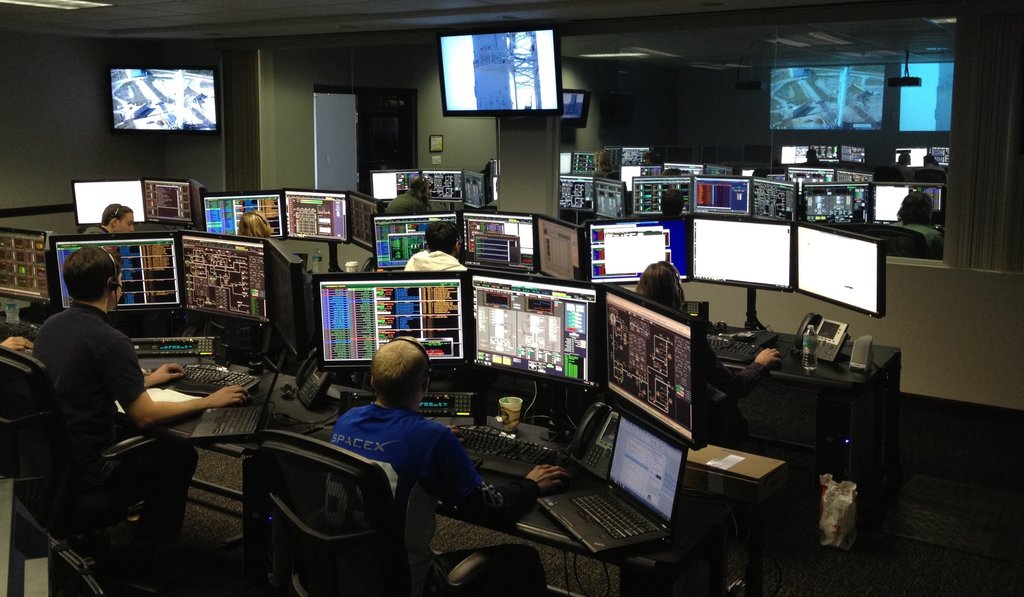 2017 was somewhat a great year for technology. Elon Musk continues to innovate with high-end Tesla electric cars as well as SpaceX missions for Mars. Living on Mars may still be decades away, but it’s still exciting to hear constant news reports about SpaceX’s many endeavours and trials. Musk also pitted his own AI against a professional gamer in a friendly match — and won.

And of course, the yearly round of smartphone wars happened. Recent debates stew around Apple and their decision to deliberately slow down their phones. Earlier in the year, there was talk their ridiculous features and design choices in the iPhone X, as well as it’s four-digit price tag. Samsung also took flak for their fingerprint scanner’s placement, and Google removed the headphone jack for their Pixel 2.

And what about the BitCoin? Emotional roller coasters are taken as people surge to buy up cryptocurrency, and those who invested earlier are now being rich simply for being the first one there. Hundreds of variants are available right now, as people continue to open their digital wallets, and is pushing for a change in how we do business.

The technological scene has changed forever since last year for sure. 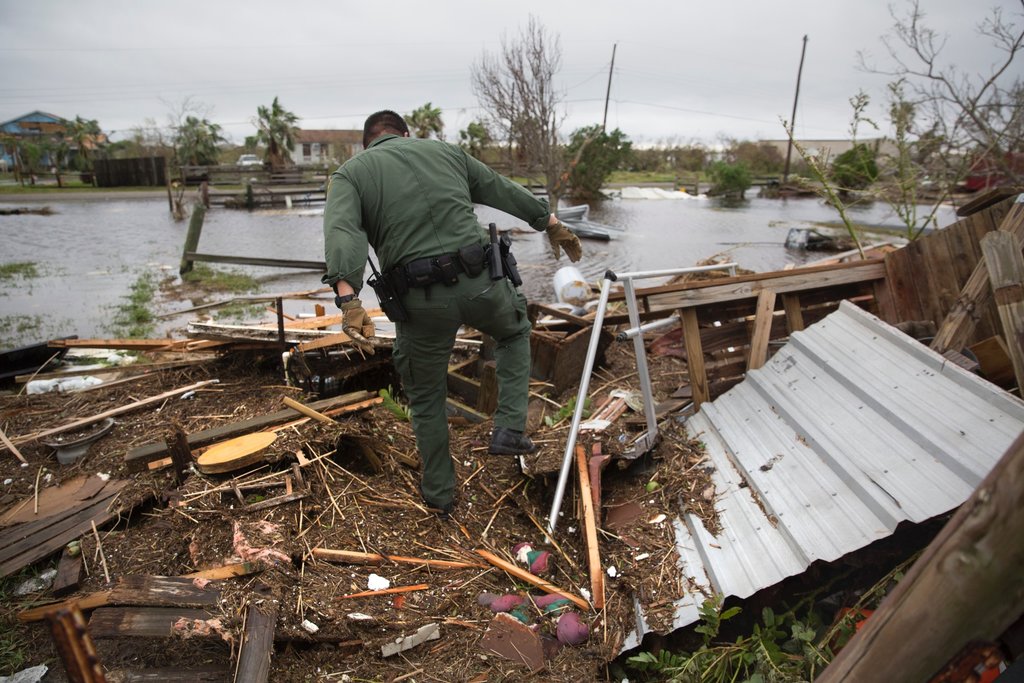 In a controversial move, Donald Trump announced intent to withdraw the United States of America from the Paris Climate Agreement. Here’s a fantastic tweet by the POTUS himself just recently, clarifying his stand on the issue itself:

In the East, it could be the COLDEST New Year’s Eve on record. Perhaps we could use a little bit of that good old Global Warming that our Country, but not other countries, was going to pay TRILLIONS OF DOLLARS to protect against. Bundle up!

Just a month later, Hurricane Irma caused 60 billion dollars of damage in the Caribbean and Gulf of Mexico areas. 134 more people died, and another 350 people lost their lives in a devastating earthquake on the 32nd anniversary of the 1985 Mexico City earthquake. 6000 people were injured and thousands more became homeless.

To wrap up, Hurricane Maria landed in that same area, laying 103 billion dollars of havoc in less-fortunate countries. 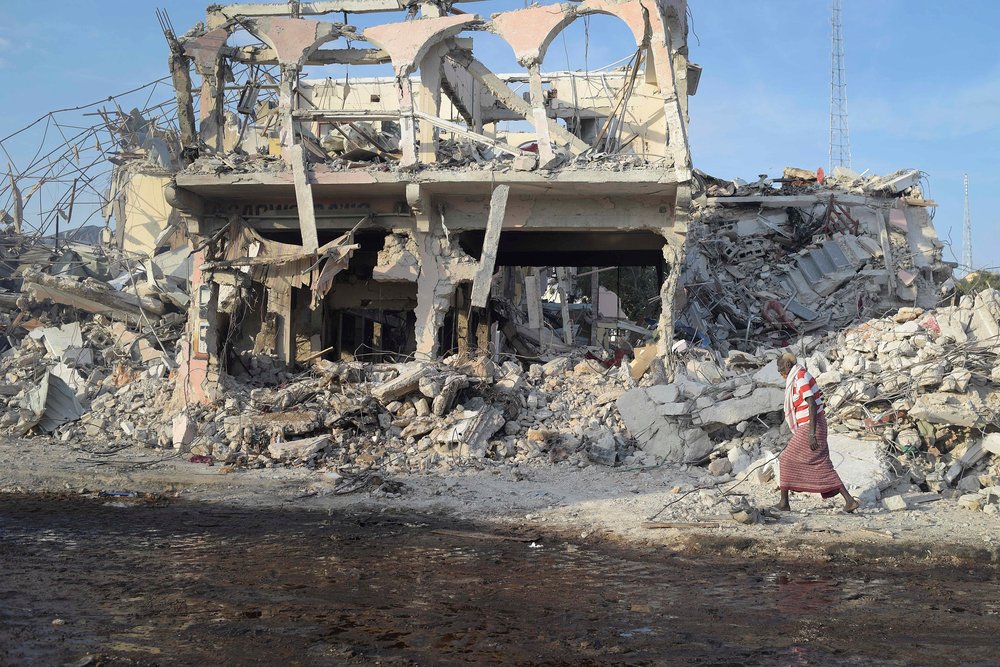 Starting off, who can forget the 500 injured by the bombing incident at an Ariana Grande concert in Manchester, England?  Whether or not you are a fan of the pop star, it is shocking that terrorism on such a grand scale still happens in a modern city, especially in an area of high security.

Then, again, the world was shaken months later, in another cosmopolitan city. In Las Vegas, One man decided to play god and single-handedly took 58 people’s lives and injured 546 more in one of the worst mass shootings in modern American history, sparking intense debate about gun laws once again.

The video that surfaced following that night’s shooting was a scene straight from hell. Shots ringing out in a nightmarish landscape, as people scream and run helter-skelter, disturbed from what would have been an otherwise normal and lavish night in Sin City. It is a tragic disaster that laid deep roots in 2017.

But it doesn’t just stop there.

With no brakes on the tragedy train, a massive bomb exploded just 13 days after that shooting in Somalia. The bomb claimed 512 people’s lives, and injured 316 more people, taking the podium for 2017’s deadliest bombing incident.

And just a month later, Egypt experienced its worst attack in history. 40 gunmen killed 311 people and further injured at least 122 people in a mosque.

The sheer amount of devastation in all three events provokes thought on humanity’s evil, but not all is lost.

After 37 years of tyrannic rule, Zimbabwean president Robert Mugabe is finally dethroned and placed under house arrest. Devastating the country’s economy, being homophobic and racist, and allowing crime and corruption to run rife in the country, it is about time he is accounted for what he has done.

Additionally, Ratko Mladić was also tried and found guilty of committing war crimes and participating in the genocide during the 1990 Bosnian War, one of the worst massacres since World War II.

So, while 2017 saw some of the worst cases of human atrocities, it also saw closure to some monsters or would-be monsters. 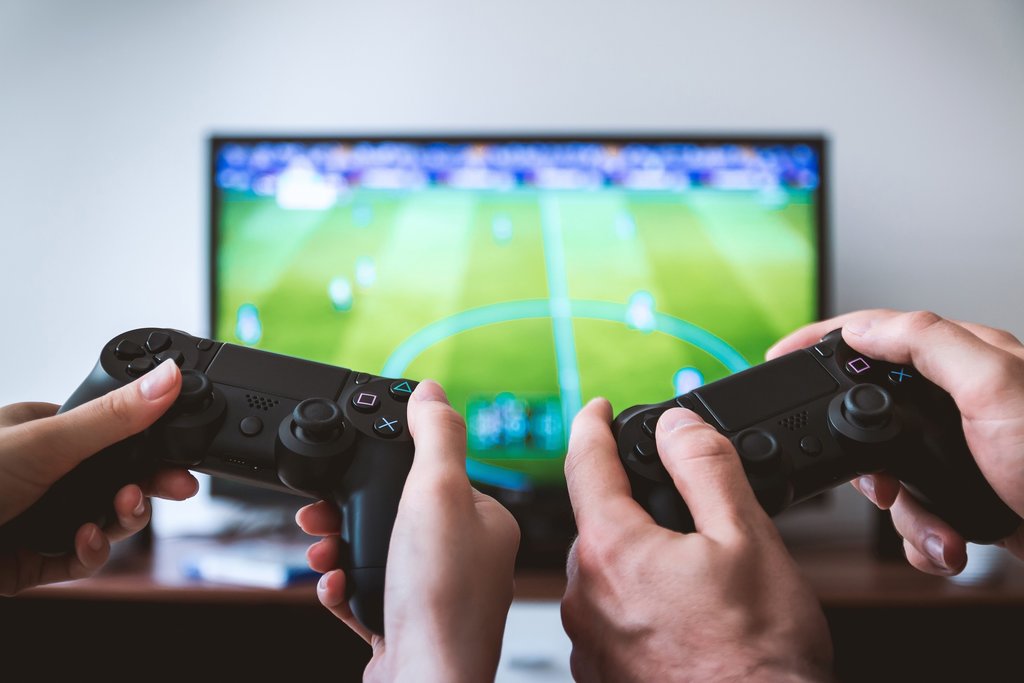 2017 saw the long-awaited release of the Nintendo Switch, a strange and unique console that enthralled the world and revived the company. With a string of successful titles like Mario Odyssey and Zelda: BotW, it has instantly became a cult classic up there beside consoles such as the Gamecube or the Nintendo DS.

While Nintendo enjoyed success, EA came under heavy fire for Battlefront II, with regards to their microtransactions. Cuphead, on the other hand, took the world by storm. With it’s classical atmosphere and intense difficulty, it was an instant hit and even sparked debate about games journalism following one poor man’s mishap.

2017 saw the release of two of the worst movies ever: The Emoji Movie and Transformers: TLK, but also some great movies . Marvel sent off their iconic hero Wolverine with the hit movie Logan, while DC manages to claw its way back with Wonder Woman and Justice League being a hit among fans and critics alike. Meanwhile, Get Out was a successful social commentary on racism and It a successful revival of the classic. Blade Runner: 2049 was embraced by fans after a long wait, while Star Wars continues to make an impact.

So, how did you fare in 2017? Was it better or worse compared to previous years? Let us know below.

And, at least the Gävle goat in Sweden is still alive. For now. 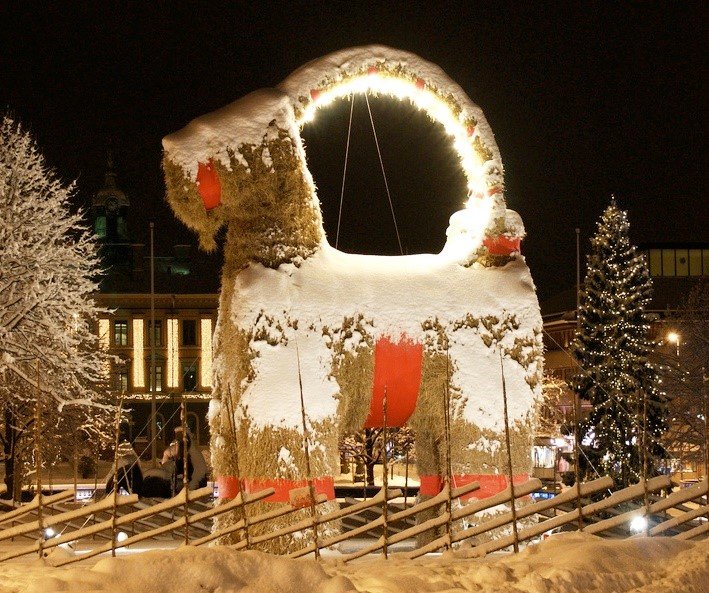