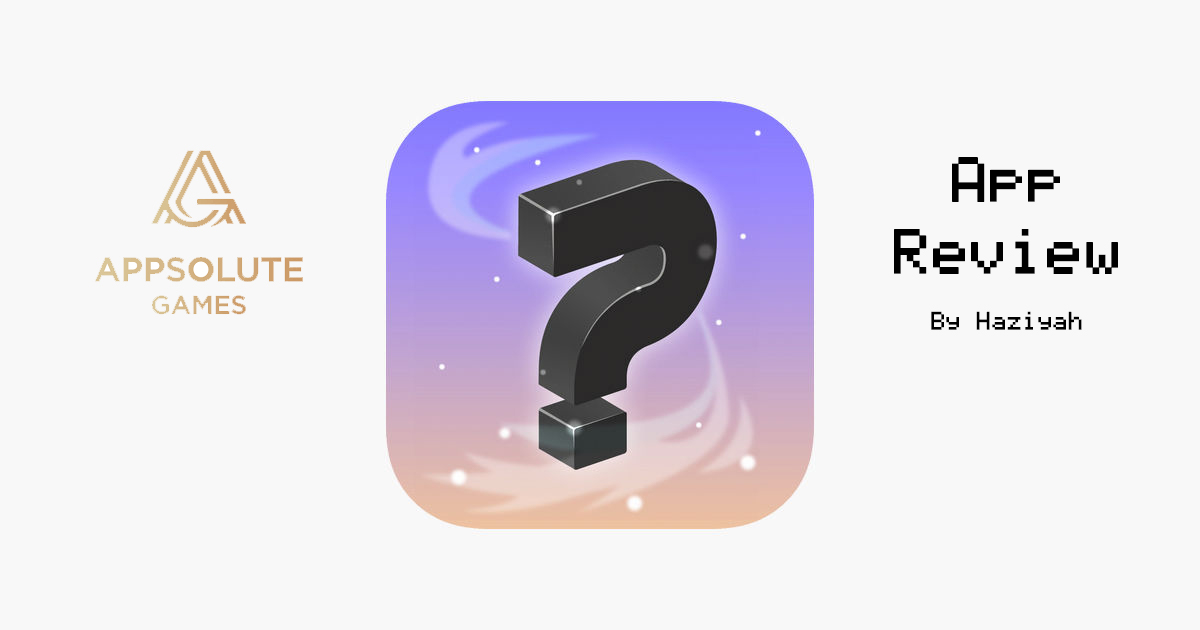 A quick glance at Singapore’s IOS app store and you’ll spot an application (App.) going by the name of Riddle! under ‘New Games We Love’. It’s a category that’s updated on a weekly basis. 12 other new games had been placed within the category as mentioned above but the one that seemed most intriguing was that app that had only a single word to it; Riddle.

When riddles are in question, I think of those that come in the form of questions and answers. Like ‘What can travel around the world while staying in a corner?’ as to which the answer will be ‘A Stamp’. Or even the long ones like ‘Two girls were born to the same mother, on the same day, at the same time, in the same month and year and yet they’re not twins. How can this be?’ for which the answer is ‘The two babies are two of a set of triplets’.

These riddles are usually puzzling and mindboggling, but the answers would often make you wonder how you didn’t think of that in the first place. Bearing in mind how I had felt that riddles were only wordy ones, I gave the Riddle! App a try. I was intrigued by how the pictures that showed a gist of what the app offers didn’t contain words on them. Was there a whole other world of riddles that I didn’t know about?

Riddle! Is made by a company called Appsolute Games. It’s the same company that produced games which some may or may not know like Hexo Brain, Candy Bounce, Rolly Tube and more. Most of their games graphics are a tad similar to those made by the ever so famous company known as Ketchapp; the company behind renowned games like Stack, 2048, The Floor is Lava to name a few.

Alas, apart from a list of apps that had been developed by them equipped with a button underneath each game image that’ll direct you to the app store, not much information can be found about Appsolute Games itself. One thing that can be noted about the company is that most of their games are available for download on IOS devices only. This includes the app in question; Riddle! For more enquiries, you’re able to submit them to their email; [email protected] Those who yearn for the more immediate response or somehow finds the concept of emailing somewhat archaic may opt for the contact-via-social-media option. Appsolute Games has Twitter, Facebook and Instagram accounts under their belt with the same username under all three platforms. A username that’s the same as the company’s; AppsoluteGames.

App developer aside, Riddle! occupies merely 60.8MB. It’s placed under the Family games category with an age rating of 4+ and beyond. It currently ranks 4th under the family genre games list.

The games Preview images reveals bold coloured blocks that are placed alongside one another to form some abstract structure. No words. No sentences. Just blocks. Intrigued, the ‘GET’ button was clicked.

Upon downloading, I was greeted with a purple interface with a beige gradient at the bottom section. Seven options were laid out on the home page including the ‘Click here to get free energy and a gift or click here just to play’ buttons. A lightning bolt is spotted at the top corner of the screen alongside the number 300.

One click on the main play button, which isn’t hard to spot seeing as to how it’s the largest, will enable you to be greeted with a ginormous yellow question mark with a pink play button underneath it. Just click that aforementioned pink button to begin.

This riddle is just like how the preview images portrayed; wordless. It’s more of a puzzle that one needn’t wreck your minds over to solve it. Just click the yellow button that’ll pop up at a random location on the block, after you’ve clicked one. The solving portion of this Riddle! App is probably how you’ll have to scrutinise every corner of the block in search of the yellow buttons; some of which are to be rotated in a particular fashion to unlock the next move. Rotating it correctly and clicking the yellow buttons before the number beside that lightning bolt dwindles to a zero, will result in you unlocking clarity upon the abstract. The blocks will form something that’ll look familiar like animals and bathtubs which will remove the word ‘abstract’ out of its equation seeing as to how you’ll able to recognise that form.

Alas, just like most apps these days, this app isn’t exempted from advertisements. They’re everywhere. They’re at the bottom section of the screen. They’re also shown randomly after or even before clicking the play button. However, the most preposterous of them all is the timer seen at the bottom left-hand corner of the screen. With the words ‘Ads will be shown’ followed by a countdown, it’s probably one of the most annoying features one will find on a free app. It made even those pop up ads less vexing. Imagine being so absorbed in looking for a yellow button to solve the Riddle or to find out what animal or object the particular block will form when an advertisement begins to play, and you’d have to wait approximately 10 seconds for the X button to plop up to exit it prematurely. Just like how the advertisement made such a jarring appearance, your concentration towards the game will also go poof in a matter of seconds. It weans interest towards solving the riddle. Another flaw towards placing the countdown is that people may not be able to concentrate on solving the riddle for it’ll feel like they have to solve it as soon as possible before the advertisement pops up. It erases the joy of having to solve a game of any sort. Countdowns should only be reserved for quizzes and celebrations but not advertisements. The timespan between each advertisement isn’t large either. It’s played every 2 minutes. Whoever thought that the idea of making an advertisement pop up within minutes would make users go, “Oh look! That app in the advertisement looks interesting, let me download it!”, thought wrong. In fact, it’s the opposite. It makes users feel like they not only want not to download the game that’s being advertised but also delete this Riddle app itself.

Additionally, this app seemed to not have any options for hints, unlike other puzzle apps. This makes one mull over some levels for hours. Scratch that, it’s highly doubted that it’ll be hours. Probably minutes judging by how people be it young or old will most likely get annoyed by the constant appearance of advertisements resulting in them being motivated to delete this app.

Hence, with Riddle! being mainly riddled with advertisements and the absence of hints, this app is nothing short of an irksome experience.

5 Reasons to Get Excited About Shadow of the Tomb Raider