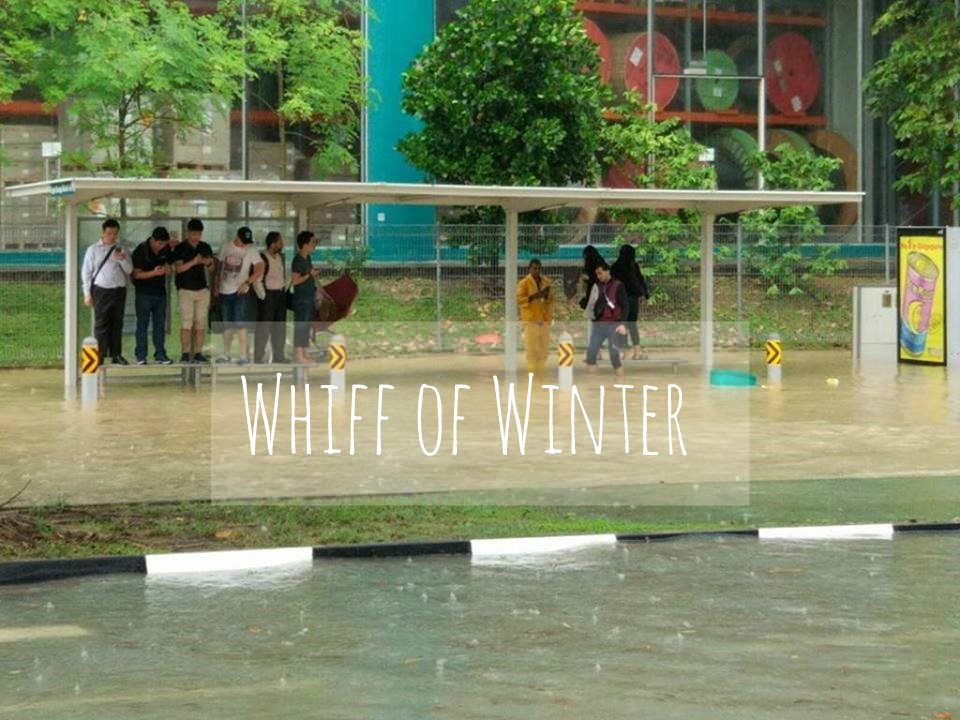 Singapore is a country that’s located on the equator. Sunny Island, some might say. That was a term familiar to many but who introduced it remained a mystery worth every penny. However, this is no article of a mystery being decoded or finally solved. This is the place where one ought to seek if they’re perplexed by Singapore’s current weather which is a far cry from the word ‘Sunny’.

The New Year kick-started with rain droplets pitter-pattering on windowpanes island wide from day to night. Temperatures dropped but not as drastically as it did several days later in the second week of January.

It seemed like any other ordinary day. Yes, it was overcast. It may have even been drizzling at some parts of Singapore. Cumulonimbus clouds were nowhere to be found. Flocks of drenched birds were seen huddled atop Housing Development Board (HDB) flats. Judging by the volume of chirps produced by them, they seemed to be engaged in an intense discussion of God knows what. Probably debating on what sort of materials they ought to find to construct a parasol that’ll fit all of them and shield them against the rain till their feathers dry up. Apart from that, nothing seems out of the ordinary. Just like it had been a couple of days back, the sun will emerge from beneath those murky looking clouds around noon, after it’s done with its shower business.  Or so we thought.

The rain didn’t stop. Not even a bit. It seemed adamant on bestowing us with water in a consistent manner albeit in a similar fashion to how it did on New Year’s Eve and New Year Day itself; from day to night. It showed no signs of stopping anytime soon. Many of those who were in Singapore that day, decided to embrace this downpour by turning in early. It may or may not have stopped raining whilst we were all wrapped up in our duvets, snoring away blissfully. However, one thing is for sure. We awoke to heavy downpour the following day.

Torrential rain lashed against the windowpane ferociously in the wee hours of the morning when the entire nation was getting ready to head towards their occupation of choice, and the young generation gets whizzed off to a place that educates them in various aspects. The struggle is indeed real. Many would have thought that yanking oneself out of bed during that hour is no mean feat. Couple that situation up with a weather that many associate as ‘snuggle weather’. Yes. It must be reiterated. The struggle is real.

Alas, the struggle didn’t end there for those who were in the Eastern section of Singapore! In fact, it has only just begun. People in the East walked out of their residential buildings only to receive a rude awakening. Flash floods. They were knee deep high.

Gone were the efforts of ironing ones’ pants and skirts till its crinkle-free. They were now soaked just like they were when you first pulled them out of the washing machines.

It was indeed an interesting sight to behold. Those waiting for the bus had to resort to standing on the bus stops benches to prevent their apparels from getting wet. Little did they know, that effort to keep dry is a rather feeble attempt seeing as to how no bridge was made between the bus and the benches. Hence, those standing on the benches would soon have to waddle through the water to enter the bus the moment their long-awaited transport arrives. 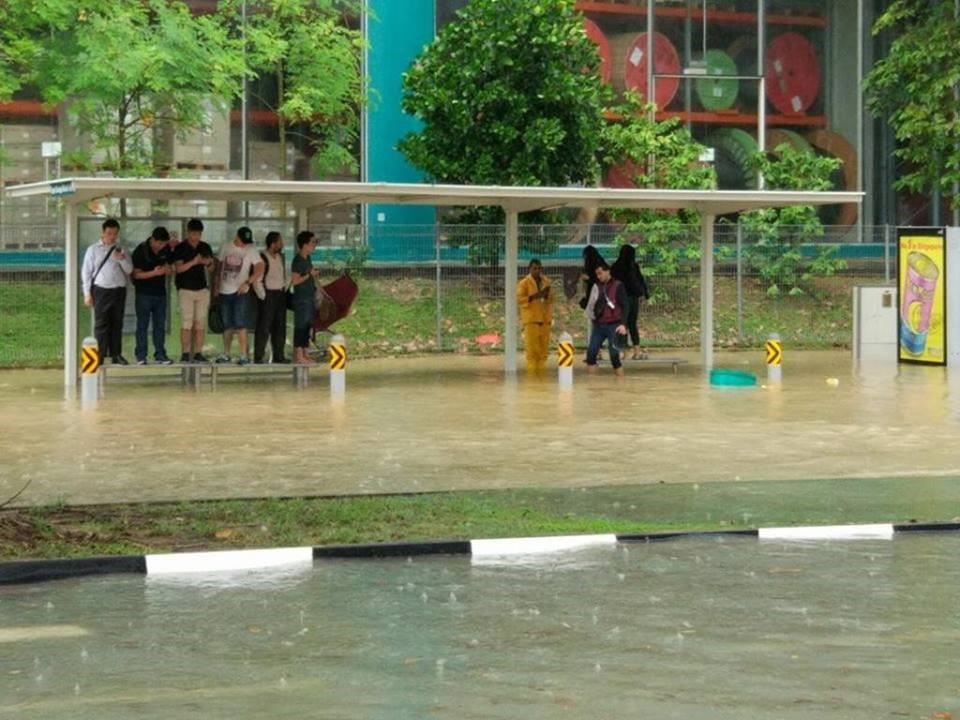 Four-wheeled vehicle owners weren’t spared either. Some cars were partially submerged. The volume of water at Upper Changi Road was much higher than other Eastern parts of Singapore that faced this flash flood situation. Tires were barely visible unless you’re somehow snorkelling at that location.

The owner of a vintage golden Mercedes Benz found herself propelled to instantaneous online fame after videos of her getting out of the car and gesturing exasperatedly beside it, circulated like wildfire. The flash flood must have hindered her car from moving any further. She finally resorted to pushing it against the stream of water on her own. 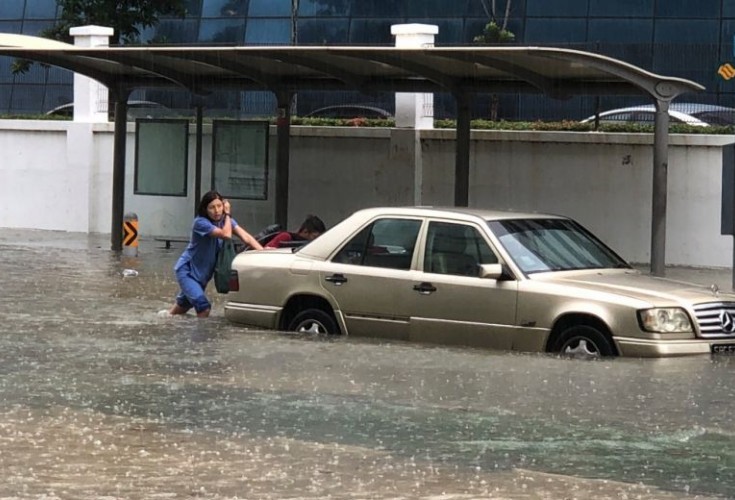 Another being decided to handle the ponding situation to a whole other level. Just like others, he was probably heading to work. He was spotted rowing a canoe at Rowell Road. Yes. You read it right. Canoe. Rowed on a street that aptly had the word ‘row’ on its name too; Rowell. Equipped with a life jacket and oar, he seemed geared enough to compete in the Olympics. His face had sheer determination written all across it. He must have thought that the flood was island wide and that he’ll be able to canoe his way to his destination. Alas, it’s not. The water was only deep enough to canoe till the end of Rowell Street. Looks like he’d have to resort to other methods next apart from canoeing. Equestrian maybe? 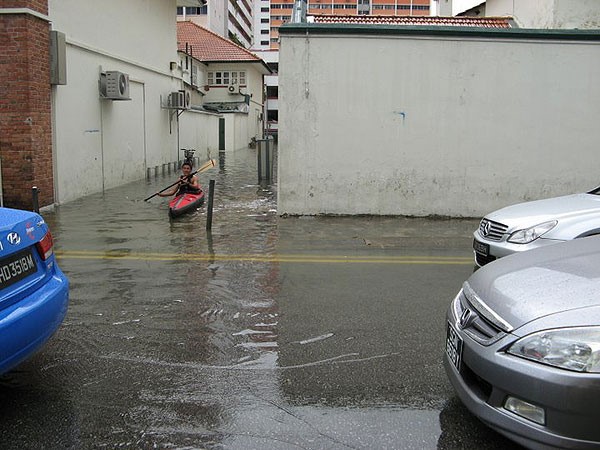 The rain persisted days after the flash flood situation. Much to the dismay of some, it didn’t flood anywhere else despite the daily rainfall. There was even a Facebook page made inviting people from all walks of life to take part in a mass canoeing session if it does flood again. Grab, the platform that enables users to book taxis and cars may even be considering adding sampans into their list of offered vehicles had the floods become a regular thing. 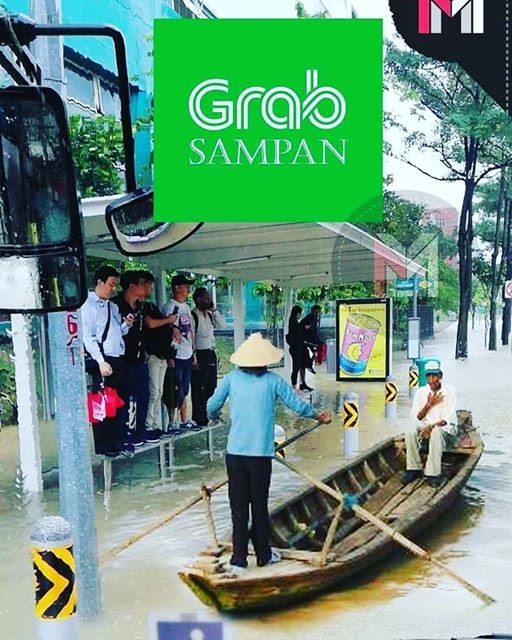 Basking under the sun and absorbing all those UV Rays became a rare phenomenon in Singapore these days seeing as to how the sun is frequently being shrouded by thick grey clouds. Clouds that seemed like it’s about to unleash a fresh wave of rainfall anytime soon. Temperatures began to dip, and boy did it dip low. Low in terms of Singapore’s standard that is.

Singapore is usually a country that faces temperatures of around 30 to 32 degree Celsius. Perspiration and heat are what we’re used to. Fans and air cons are our allies. However, those so-called allies transformed to immediate foes the moment temperatures in Singapore began plummeting to as low as 21 degree Celsius from 11th January to as recent as 14th January 2018. Apparently, it was all due to the monsoon surge from the South China Sea.

The dip in temperatures on this Sunny Island caused quite a stir amongst many. Those who were used to equatorial temperatures finds the wind chilly and fears that they may be experiencing frostbites. Several whipped out their winter wears and heattech collections in a bid to ward off the cold. Some were alarmed that they had no heat radiators but found comfort in supermarkets and 7 11s where the temperatures seemed to be much warmer than their home.

Speaking of homes, did anyone notice how their floor tiles felt like they’re a temperature or two away from being akin to an ice rink? Those floor tiles didn’t just felt icy, some even cracked and exploded. An advisor from Singapore Renovation Contractors and Material Supplier Association, Mr Tan Chim Hoon explained how the weather these days fluctuated between extra hot or cold which resulted in tiles having insufficient space to expand. Hence, it popped up. 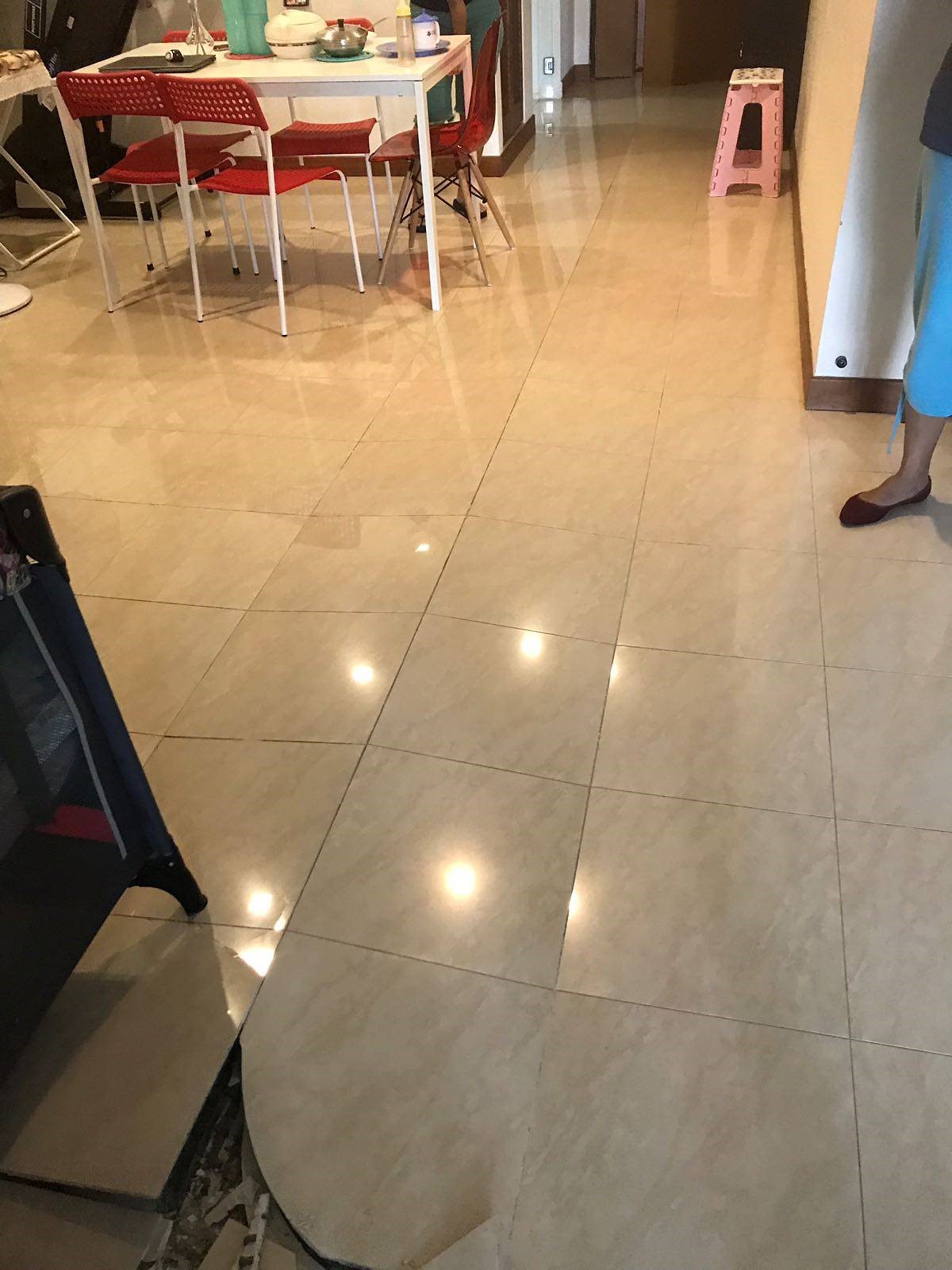 Alas, this cooling weather is only temporary. It won’t dip even further to the point where Singapore can be rained down by snowflakes instead of droplets of water. Temperatures are already seen to be creeping back up towards its usual 30 degrees’ range come 15th January 2018. It’s already 28 degrees that afternoon which is a number deemed rather high as compared to the previous few days whereby temperatures remained between 23 to 25 degrees throughout the entire day.

Nonetheless, enjoy the cold breeze while it lasts.