Alien, Blade Runner, Gladiator – there are few directors better in world-building than Ridley Scott. His universes feel lived in and alive, full of lore and rich backstory. Alien: Covenant edges the polarising Prometheus prequel closer to the original Alien classic, with plenty of answers and revelations. So much so in fact, that when all is said and done, Scott may just have taken the “alien” out of Alien.

Covenant holds very much a throwback plot. It marries what audiences love about the first two Alien films with Scott’s pursuit of theological and essential enlightenment in Prometheus (for the record, this reviewer never had any issues with Prometheus’ accused pretentiousness – while unanswered, it was exciting and thought-provoking in its own right). It opens much like the first two, with the Covenant landing off on an unknown planet due to technical malfunctions. The planet holds the promise of humanity’s next home, but as always… aliens. 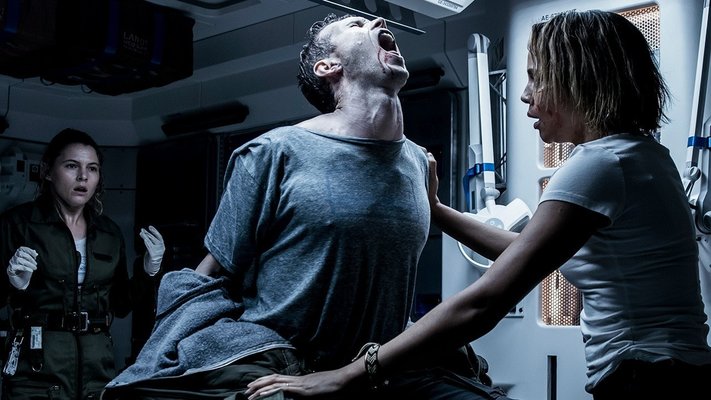 Along with the classic Xenomorphs, Covenant also marks a return to R-rated movies for Scott. The aliens are properly savage, with sharp edges all over that rip apart clothes and of course, skin. Covenant has a rare focus on the aliens’ physical movement too, Scott decidedly allows audiences to see a lot more of the alien, unlike the classics that only shows us glimpses of the Xenomorph to crank up the terror. I’m all for slow-building scares, but the frantic nature of their movement really does create some intense sequences. The art direction here, particularly in its scenes of body horror, is truly disturbing. Contrasting the pale whites of human skin with the bright reds of blood are visually alarming and the new ways that the aliens burst out really get under your skin. There’s a new alien too, an earlier prototype called the Neomorph that’s marble-white and very distressing to look at. We see the alien come closer to the Xenomorph we know, and the crumbs of revelations we slowly pick up are satisfying – to a certain extent.

While it’s fascinating to witness the Xenomorph’s creation and evolution fleshed out, the intertwining of human ambition with its conception is one that gradually upset me. The frequent allusions to Shelley and Ozymandias and Frankenstein’s monster create an overly familiar dynamic to the revered origin story. The plot weaves in eugenics – things are done for the betterment of the species to create the perfect organism, instead of the weak mortals mankind are. There is a scene where David questions his maker’s mortality – who is the greater being when one will die and another will live forever? This concern largely paves the way for everything that happens for the rest of the movie, but to detrimental effect, narratively. There certainly are interesting topics thrown about, but this is the wrong franchise to play with.

After its big reveal, the sense of sinister coincidence and mystery surrounding the alien was painfully taken away – they didn’t seem so frightening anymore. The raw savagery, and the inability for anything to control the Xenomorphs was lost. There was a profound simplicity with the original Alien. Everything that was going on board the ship was a case of natural selection, preyed by a freak of nature. The fact that the crew was being massacred for no reason at all made it all the more frightening. Now there could be a reason. There could be a reason why Ripley’s fate was interwoven with the Xenomorph. Everything could be linked. We really don’t need that.

Read More: 5 Movie Franchises that Absolutely Need to Wrap Up

Perhaps Scott picked the wrong franchise as the vessel for his exploration of the god-complex, which was really what Prometheus was. Given its unpopularity, the studios must’ve insisted the only way forward was to give audiences more of the alien, so what we get here is more Alien than Prometheus, causing them to meddle deeper into the Xenomorph history. Prometheus, with all its grand ideas about creation, is completely sidelined, with no promise of a re-visit as the film quickly commits to its Alien backstory. It’s a real pity – in spite of its accused pretentiousness, few films have actually attempted to explore humanity’s origins, and I’m sure whatever your gripes are about Prometheus, following through would make for a thought-provoking and intriguing film.

Covenant redeems itself by being an Alien movie. It’s still the Xenomorph and it is always satisfying to see their anatomy and sadistic savagery. That’s perhaps the best part of Alien: Covenant, when these freaks of nature go berserk on their killing spree, uncontrollable and unstoppable. That is the way they should’ve been left all along. 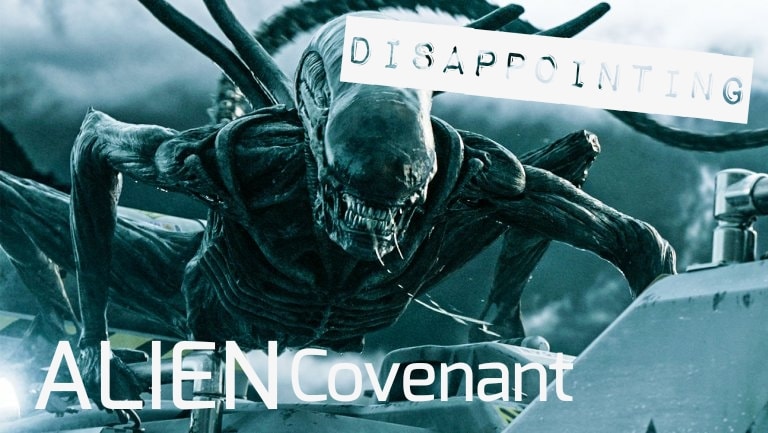 To find out more about Osmond’s review system, click here!

Want to write with us too? Find out more here!

Watch the trailer for Alien Covenant below: